British Retail Consortium (BRC) reported a 13.1% jump in retail sales in June 2021 than the same month two years ago. BRC, a trade body representing the UK retailers, also said that the second quarter of 2021 saw exceptional growth because of pent-up demand from UK households, ease in lockdown restrictions that allowed physical shops to open once again and the EURO 2020 tournament. As a result, total sales during the second quarter of 2021 were up by 10.4% compared to the pre-pandemic year 2019. However, post lockdown ease and opening of physical retail stores, online sales saw a dip of 7%, but online penetration remain much higher than pre-pandemic levels.

The surge in retail sales is validated by another critical data by Barclaycard, which reported 11.1% higher credit card spending in June 2021 as compared to the same month of 2019. In addition, consumer spending on fuel, hotels, resorts saw an uptrend. 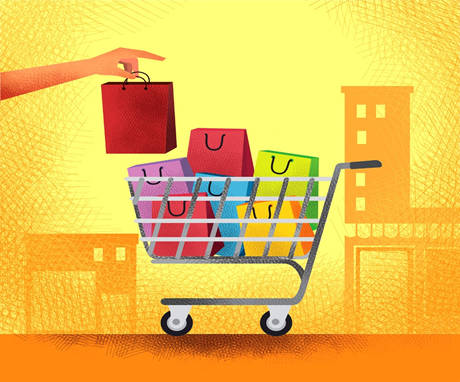 Let us explore the Top 5 retail stocks to keep an eye on in July:

FTSE 100 listed company is the largest supermarket chain in the United Kingdom with a 28.4% market share. The company runs and operates around 6700 stores in the UK and Ireland. Retail sales contribute a significant part of the company’s revenue.

Recently the company declared first quarter results, in which UK sales was up by 8.7% to £10,016 million compared to pre-pandemic year 2019. The online demand was higher with 1.3million orders per week,and online sales saw a 22.2% growth. Strong growth was reported in the non-food segment like clothing.

The company generates 45% of its retail revenue from the UK and Ireland market by selling premium clothing, while the US market, where the company is expanding aggressively, contributes 21% of revenue. In the recently concluded EURO Championship, the company saw an uptrend in sportswear sales, especially in the UK and European markets, because of high customer demand. In addition, further ease in lockdown restrictions will allow JD sports to open all its 300 stores in the UK market.

The company operates an online fashion website that sells clothing, fashion accessories for 16 to 40 age group. Besides the United Kingdom, the company has a presence in Europe and the US markets.

Recently the company announced first-quarter results, and the overall group revenue saw a growth of 32% at £486.1 million. The company has given positive guidance for this financial year with revenue growth of around 25% and adjusted EBITDA margins in the range of 9.5-10%.

The company manufactures and retail luxury goods under the Burberry brand. The company operates around 214 mainline stores, 56 outlets and 44 franchise stores.

Recently the company CEO, Marco Gobbetti, stepped down after five years with the company. Marco Gobbetti was a pioneer in the transformation of Burberry's brand and business. Burberry Group is yet to announce the name of the new successor to Marco Gobbetti.

The company reported £2,344 million in revenue, a dip of 11% in the year ended March 2021. The pandemic had a hit of an average of 16%, as the company stores remained closed. Despite this growth, number was high in certain locations like Mainland China, Korea and the US.

The company operates retail supermarkets in the United Kingdom. It provides in-store and online grocery shopping. The company has a 10% market share in the UK and has a network of 500 stores in the country.