Shares of NEXT PLC (LON: NXT) were up by around 3.01 percent, whereas shares of Marks and Spencer Group PLC (LON: MKS) were down by close to 1.65 percent, from their last closing price (as on 17 September 2020, before the market close at 12:40 PM GMT+1). In the recent update released by the both these retail stocks, they have highlighted that the sales through the online platform have performed well and post reopening of the UK economy the out of town stores and retail stores have performed better than the legacy stores in the high street due to the social distancing norms.

NEXT PLC is a UK based company that offers clothing and homeware products. The Company sells its products through a network of stores and online channels. It has in-house design capability and source globally, and it also sells close to 10,000 third-party products. NEXT operates an online website in around 70 countries, runs 500 stores, 7 UK depots and two international hubs.

The Company generated sales of £1,356.8 million for six months ended July 2020, which fell by 34 percent year on year from £2,058.8 million a year ago. The profit before tax fell to £9 million from £320 million a year ago. The profit after tax for the reported period was £15 million, and the earnings per share were 11.8 pence. NEXT generated cash inflow of £347 million in six months ended in July 2020 against cash outflow of £97 million generated last year. At the end of July 2020, the net debt stood at £765 million, excluding the leases.

Factors that supported the Sales during the pandemic NEXT's sales were supported by its online business, and during the pandemic, it was able to make for some of the sales lost due to the shutdown of the stores. However, some of the supply chains were disrupted in March 2020 as it had to close the warehouse due to the covid-19 safety measures. The diverse product range was the other key factor that supported the trading activity as a decline in sales of work, and occasion clothing was offset by increased sales of children wear and sportswear. Post stores reopened, the shops in smaller cities have performed better than those in bigger cities, which has provided some cushion to the sales.

1-Year Chart as on September-17-2020, before the market close (Source: Refinitiv, Thomson Reuters)

The performance of the stores had been above expectation since the lockdown has eased. Online sales continue to grow despite reopening of stores as there is a shift in the shopping pattern. NEXT acknowledges that future of the business remains uncertain with no signs of the development of the covid-19 vaccine. It had performed the scenario analysis for its future sales and highlighted that in the base case, the sales would decline by 12 percent year on year in the second half of the financial year. The Company would have increased cost implication as the furlough scheme comes to an end in October 2020.

Marks and Spencer Group PLC is a UK based retailer. It sells clothing, food and home products through its website and stores. The Group operates in Europe, Asia and the Middle East. Marks and Spencer is included on the FTSE-250 index.

Trading update as reported on 18 August 2020

The performance of the Group has been above expectation amid the economic uncertainty. The performance of the Food business was commendable during the 13 weeks ended 8 August 2020 as it grew by 2.5 percent years on year despite the closure of stores at travel locations. The like for like sales excluding the impact of travel and hospitality franchise the sales were up by 10.6 percent year on year. Marks and Spencer is on track building its partnership with Ocado Retail, which is expected to complete in September 2020. The Group would launch close to 500 new products in its store as part of the transaction. Clothing & Home business was down by 38.5 percent year on year for 13 weeks ended on 8 August 2020. The sales have improved slightly since the economy reopened as they were down by 29.9 percent year on year for eight weeks ended 8 August 2020 during which the store sales fell by 47.9 percent as compared to last year, whereas the online sales were up by 39.2 percent year on year. A shift in the purchase of clothing has been noticed as people are bought more sportswear and leisure clothes and the sales of formal attire remained bleak.

The Group is undergoing a transition and is relaunching the CRM platform under the banner of Sparks, and it is focused on increasing sales through the digital medium. Since the beginning of 2020, the Group added 1.9 million new customers online and online sales are representing an increasing share in the total sales. The home delivery increased to around 68 percent this year as compared to 29 percent last year. Marks and Spencer invested in increasing the capacity of its Castle Donington supply centre, which has played a vital role in supporting the online business. The Group is building partnerships for growth as it is opening a warehouse with XPO Logistics in Milton Keynes, and it is working with logistics partner GIST on supply chain effectiveness programme.

A glance at FY2020 Performance 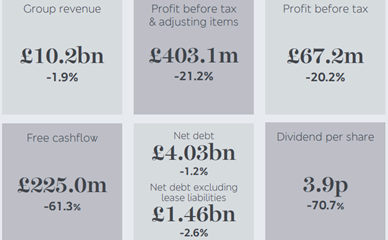 1-Year Chart as on September-17-2020, before the market close (Source: Refinitiv, Thomson Reuters)

A shift in trend has been noticed recently as sales of out of town stores have performed better than the signature stores situated in the city centre. The Group highlighted that the pandemic undermined the performance of the Clothing & Home business, whereas the Food business was steady. Thus it believes the workforce can multitask and do cross-functional work, which may lead to the loss of 7,000 jobs over the next three months.