Given the above-market conditions, we would review two stocks - Royal Dutch Shell PLC (LON: RDSA) & BAE Systems PLC (LON: BA). RDSA is an energy stock, and BA is an industrials stock. Let’s walk through their financial and operational updates to understand the stock better.

Royal Dutch Shell PLC is a UK based Group engaged in energy and petrochemical business. The Group reports its operation under four segments, namely Integrated Gas which cover LNG activities, Upstream, which includes crude oil & gas exploration and extraction, Oil Products and Chemicals. It is included in the FTSE 100 index.

In H1 FY20, the Group reported a revenue of USD 92.5 billion, which declined from USD 174.2 billion in H1 FY19. The total expenditure during the reported period was USD 116.7 billion that was lower than USD 163.1 billion in H1 FY19 due to lower purchases. The Group reported a loss of USD 18.1 billion in H1 FY20 against the reported profit of USD 9.3 billion a year ago. It incurred a post-tax impairment charge of USD 8.1 billion related to operations at Prelude floating LNG and Queensland Curtis LNG in Australia. Integrated Gas, Upstream, Oil Products and Chemicals generated revenue of USD 17.5 billion, USD 3.5 billion, USD 65.8 billion and USD 5.5 billion, respectively. In H1 FY20, the Group generated an organic free cash flow of USD 10.0 billion. The cash capital expenditure was USD 8.5 billion in H1 FY20. As on 30 June 2020, the net debt was USD 77.8 billion and a net gearing of 32.7 percent. The Group declared the interim dividend of USD 0.16 per share for Q2 FY2020. Shell sold the position in Appalachia shale gas for USD 541 million and expected it to complete in Q3 FY20.

The Group expects Integrated gas production to be in the range of 820 – 880 thousand boe per day and LNG liquefaction volume to be 7.6 – 8.2 million tonnes. Upstream production is expected to be around 2,100 - 2,400 thousand boe per day. The production of Oil products to be about 4,000 – 5,000 thousand barrel per day with a refinery utilization in the range of 68 percent to 76 percent. Production of Chemicals sales volume is expected around 3,600 – 3,900 thousand tonnes with a chemical plant utilization of approximately 78 percent to 88 percent.

BAE Systems PLC is a UK based group that provides technology and solutions to the aerospace and defense sector. The Group classifies the business under Electronic Systems, Cyber & Intelligence, Platforms & Services (US), Air and Maritime. The Group is included in the FTSE 100 index. 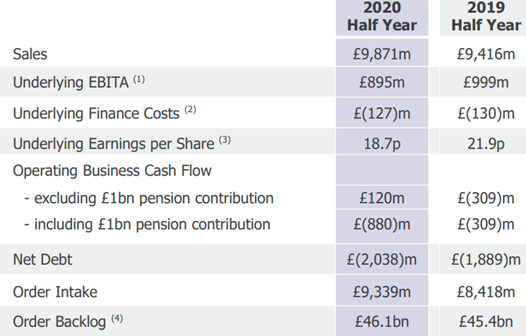 BAE Systems anticipates the sales to increase by low single-digit for full-year FY20 compared to FY19. The sales would be underpinned by increased trading of F-35, Combat Vehicles and Qatar Typhoon. Commercial business growth is expected to be bleak, whereas electronic defense portfolio is expected to grow. The earnings per share in FY20 is expected to be lower than that in FY19. The free cash flow is expected to be close to £800 million excluding £1 billion non-recurring contributions to UK pension. The Group would focus on the Defense and Security business and expects a steady performance of Defense business in H2 FY20 that has resumed to near the normal level of activity.