Hochschild Mining Plc (LON: HOC) is the LSE listed metals & mining stock. Based on 1-year performance, shares of HOC have generated a return of 18.53%.

Hochschild Mining Plc is the FTSE 250 listed Company, which is the producer of high-grade silver and gold currently has its operations in three underground mines, two located in southern Peru (Inmaculada and Pallancata) and one in southern Argentina (San Jose). The Company is having a 100% stake in Inmaculada and Pallancata and 51% stake in San Jose.

Production Guidance for FY21 as reported on 11 November 2020

The Company has appointed Jill Gardiner as an Independent Non-Executive Director with effect from 1 August 2020. 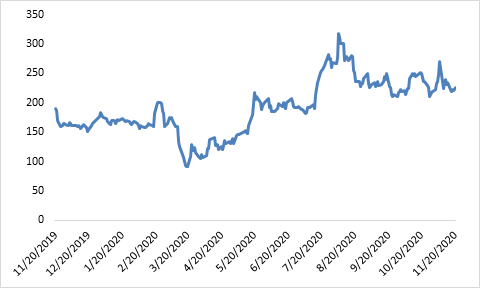 The Board has considered the resumption of dividends due to its strong financial position, and they have shown full confidence in the prospects of the Company by giving FY21 guidance for production, costs and capital expenditure. The Company will remain in a healthy financial position well supported by the strong performance of precious metal prices during the year and ongoing development of various exploration programmes. However, the Company is also cautious that Covid-19 pandemic will continue to impact operations of all three mines.