Greatland Gold PLC (LON: GGP) and Jubilee Metals Group PLC (LON: JLP) are two mining stocks listed on the FTSE index. Shares of GGP and JLP were up by around 10.60 percent and 5.82 percent, respectively from their last closing pricing (as on 14 September 2020, before the market close at 1:30 PM GMT+1). It is mindful to note that shares of GGP touched their 52-week high of GBX 22.50 on 14 September 2020.

In the recent update on a drilling programme at Havieron deposit in the Paterson region of Australia, the Company highlighted the potential for bulk tonnage opportunity. In the Northern Breccia, it observed massive sulphide mineralization and the infill drilling depict geological and grade continuity within the crescent sulphide zone.

1-Year Chart as on September-14-2020, before the market close (Source: Refinitiv, Thomson Reuters)

The Company highlighted that it expects the delivery of initial resource at Havieron deposit in Q4 2020. It is also exploring other assets in the Paterson region. Subject to supportive results at Havieron, the Company plans stage-3 that includes an investment of USD 25 million & pre-feasibility study, stage-4 that involves the investment of additional USD 20 million for pre-feasibility study and the last stage would be to decide on mining. 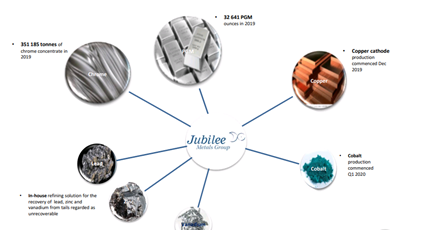 1-Year Chart as on September-14-2020, before the market close (Source: Refinitiv, Thomson Reuters)

The Company is focused on expansion and developments of projects in Zambia and South Africa, and the renewal of the license in Zambia has strengthened its plan. Jubilee Metals expects to produce the copper concentrate in next three months from the vast amount of copper surface tailings it had received recently, and it will start the processing of 150 tonnes of copper tailings it acquired in June 2020. The Company is assessing the expansion at Inyoni to 3,500 PGM ounces per month.