The share price of Serco Group Plc (LON: SRP) surged after it announced that the UK government has extended its contract for the Test and Trace scheme on 16 October 2020. At 11.25 AM, the company’s stock was trading around 17 per cent higher at 138.50 from its previous day’s close of 118.40.

In its unscheduled trading statement for Q3 announced on the London Stock Exchange, the British outsourcing major, upgraded its guidance for 2020 based on strong Q3 trading across all geographies globally. The company forecasted its full-year revenue to be around £3.9 billion, an increase from £3.7 billion predicted earlier. As compared to earlier estimates of £135 million-£150 million, Serco expected its trading profit, before any one-off costs, to remain between £160 million and £165 million.

The company raised its full-year revenue guidance to around £3.9 billion and underlying trading profit (UTP) to £160 million-£165 million. This guidance would signify around 15 per cent organic growth in revenues, more than 30 per cent growth in UTP.  Serco said this upgrade was mainly because of the combined results of effective cost control measures and a healthy revenue growth in Q3.

Being one of the leading companies engaged in the British government’s the Test and Trace programme, Serco has been able to achieve a healthy growth in terms of revenue for the three months from July. Serco said the surplus profits could now be offered to the shareholders with a discussion on dividend payouts underway.

In Q3, cash generation has remained better than expected. The company was stuck in delays in bill processing for its FEMA contract from the United States. In the first half, this contract held back cash generation. At year-end, Serco expected its adjusted net debt to remain between £100 million and £150 million, with leverage of around 0.6x.

Additionally, Serco has informed that after its successful issue of £154 million ($200 million) of US Private Placement loan notes, it was likely that the headroom on its committed finance facilities would be at a minimum of £500 million.  As per the outsourcing giant’s declaration in its first half earnings report, it intended to make an early repayment of the UK government’s value added tax deferrals. Serco said that most probably, payment would be done in the coming weeks. In addition, Serco declared in August that they would soon decide on dividend payouts, which were withdrawn earlier (2019 final).

Guidance for the 2020 financial year by Serco Group Plc 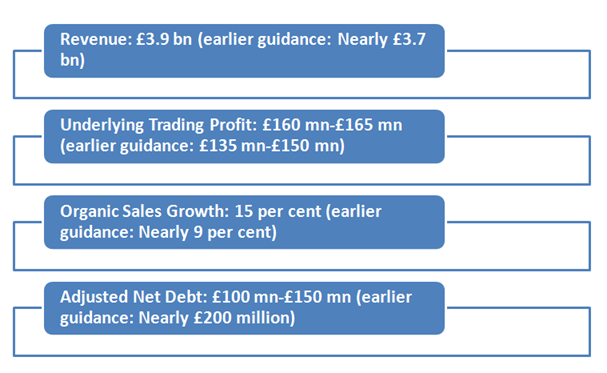 The British outsourcing major has international operations and all regions have been performing better than its targets. Serco has thus raised its forecasts for 2020.

In Britain, the extensions of the UK Test and Trace scheme contract showed customer's satisfaction and the quality of work delivered.

Serco has also noticed an increase in the number of asylum seekers that it has been looking after on behalf of the Home Office. Besides successfully mobilising the new Prisoner Escorting contract, it obtained an extension to the Emergency Measures Agreement on the Caledonian Sleepers to the end of 2020.

The Test and Trace programme

The announcement of the contract extension followed a day after when the NHS Test and Trace recorded its worst ever week for contact tracing, amid the continued rise in Covid-19 infection rates.

As per the latest statistics, for the week ending 7 October, around 62 per cent people, close to infected patients who tested positive for Covid-19 in England, were reached through the system. Since the beginning of the Test and Trace programme, this was the lowest weekly percentage, down from around 69.5 per cent for the week before.

For cases handled by local health protection teams for the same week, almost 98 per cent of the contacts were reached and told to self-isolate. Approximately 58 per cent of the close contacts for those handled online or by call centres were reached and requested for self-isolation. The manner in which the system functioned had been subjected to criticism.

Serco said that it has employed approximately 9,000 people to support the programme.  Despite being crucial, the part that the outsourcing company played was limited and specific. It is one of the five suppliers that have fixed and mobile sites where people go for getting tested. On the tracing part of the programme, Serco is one of the two major contractors responsible for reaching out to the people identified by the NHS team.

Serco Group provides public services to governments and other clients operating in the public sector.  Defence, transport, justice and immigration, health, and citizen services are the key sectors in which the company operates. That’s not all, Serco has international operations across Europe, North America, Asia Pacific and the Middle East.