Benchmark Holdings Plc (BMK) is involved in the provision of aquaculture genetics, nutrition, and health. The company's operations are now differentiated in three operating segments: genetics, advanced nutrition and health. The group develops a product that helps shrimp and fish to improve their profitability and sustainability by increasing quality, yield and by decreasing mortality. The company’s products consist of shrimp and tilapia, high genetic quality ova for salmon, and breeding, program, specialist feeds for initial stage shrimp and fish; medicines, probiotics, biocides, and Vaccines.

On 29th May 2019, the company announced that it had finalized the dissolution of its joint venture with the AquaChile (Empresas AquaChile S.A.). The company will obtain its $16.25 million original investment in the Joint Venture (JV). Payment will be given in two instalments, a first is US$7.5 million payment will be made after the completion of 10 days and rest will get after six months of completion, i.e. US$8.75 million. The group will also receive the Intellectual Property (IP) rights, biomass and genetics stock in the JV. The dissolution has formed a prospect for the BMK to take charge of a land-based salmon breeding facility.

Trading update, fixed income investor meetings and a notice of results (as on 3rd June 2019)

Revenue was £78.3 million, an increase of 3.4 per cent from the H1 FY18, due to the rise in Knowledge Services, Genetics, and Animal Health, which were more than offset to lower revenue in Advanced Nutrition as an outcome of faintness in the international shrimp market.

Adjusted EBITDA stood at £7.5 million and was up by 23 per cent from the H1 FY18, driven by the involvement of higher value products, a surge in the cost of biological assets. In Norway, the sales increased, and capacity also increased at the group's new land-based salmon egg facility. The adjusted EBITDA margin rose to 10 per cent against the 8 per cent in H1 2018.  At March 31, 2019, net debt stood at £65.5 million.

DNB (DNB Markets) has been assigned to organize fixed income investor meetings in linking with the refinancing of its current USD90 million credit facility, through the problem of a listed Nordic bond and a RCF (revolving credit facility). The group will declare its interim results for the six months ended March 31, 2019, on June 25, 2019. 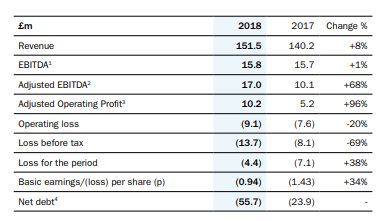 The company’s revenue climbed by 8 per cent to £151.5 million as compared with the financial year 2017 of £140.2m. On a constant currency basis, revenue rose by 13 per cent. An increase of 17 per cent in salmon genetics revenue, due to a surge in the volumes and average prices resulting from consumer demand, the success of winning market share and new products launched. An increase of 2 per cent in the sales of nutrition products, reflecting the ongoing increased demand for higher value live feed replacement and healthy diets, growth in sales volumes of live feeds not reflected in revenue due to low market prices for some products. A rise of 7 per cent in animal health sales, due to the first commercial field trials of Benchmark’s next generation sea lice treatment and CleanTreat coupled with stable Salmosan revenues.

The gross margin increased to 49 per cent as compared with the financial year 2017 of 45 per cent, driven by the company’s strategic focus on added value services and products. The Adjusted EBITDA rose by 68 per cent to £17.0 million against the £10.1 million in FY2017, due to an increase in sales volumes and prices coupled with lower expensed R&D. Adjusted EBITDA margin stood at 11 per cent. Adjusted operating profit climbed by 96 per cent to £10.2 million as compared to £5.2 million in FY17.

Operating Loss surged to £9.1 million, due to the Higher depreciation following current investment in production capacity and acquisition-related expenditure of £1.2 million, whereas 2017 benefited from a £5.6 million credit. The reported loss for the period decreased to £4.4 million, due to an increase in tax credit and the impact of foreign exchange. Basic loss per share fell by 34 per cent to 0.94 pence as compared with the financial year 2017 of 1.43 pence.

Net debt rose to £55.7 million against the £23.9 million in FY17, mainly due to £32.7 million capital expenditure, including £17.9 million investment in Salten facility and investment associated with the field trials of the new sea lice treatment. Net debt includes £27 million ringfenced non-recourse debt to fund the Salten facility. The $20 million additional facilities combined with the year-end cash balance of £24.1 million provides the company with funding for continuing growth and additional headroom.

Daily Chart as at June-11-19, before the market closed (Source: Thomson Reuters)

At the time of writing (as on June 11, 2019, at 4:25 PM GMT), BMK shares of were quoting at GBX 41/share and remained same against the yesterday's closing price level. The outstanding market capitalisation of the company stood at around £229.73 million.

From the SMA standpoint (simple moving average), at the time of writing, its shares were trading marginally below the 30-days SMA. However, they were trading considerably below the 60-days and 200-days SMA, which indicates a negative trend in the stock price and carrying the potential to move down further from the current trading levels.

In the past 1 year, shares of BMK have delivered a negative price return of 31.21%. However, on a year-to-date basis, the stock was down by approximately 28.70% and declined by 19.61% in the past three months.

Benchmark expects to perform broadly in line with market expectations for FY 2019. It sees diverse market conditions with salmon benefitting from rising demand and constant prices, while in the shrimp and sea bass/bream markets, a provisional overstocking has resulted in low prices and a decline in production levels among the consumers. Benchmark indicated that it is making progress in improving efficiencies.

The growth drivers for the business remain decent. The company is growing considerably faster than the overall aquaculture market and it will help to boost up the business operations going forward.