Several financial institutions in the UK are aiming to acquire or form partnerships with fintech firms to add new and advanced offerings to their portfolios and boost their position in the market, according to a Lloyds Bank report. As per the sixth annual Financial Institutions Sentiment Survey by Lloyds Bank, around 46% of financial services companies plan to partner with fintech firms in the next year compared to 32% in 2020.

According to the same survey, the development of new products and services garnered 66% in terms of banking groups fintech plans, followed by 53% voting for improving client experiences and 49% for driving growth. Over 75% of the interviewed senior leaders across financial institutions in the UK were of the opinion that technology, digital investment and automation are a top strategic priority for the coming year. Nearly 77% of the interviewed financial services companies intend to increase investments in technology systems and supporting platforms in the next one year compared to 62% of companies in 2020. Below is a detailed review of the investment prospect in 2 banking companies - NatWest Group and Lloyds Banking Group, which have been the leader in the fintech initiative. 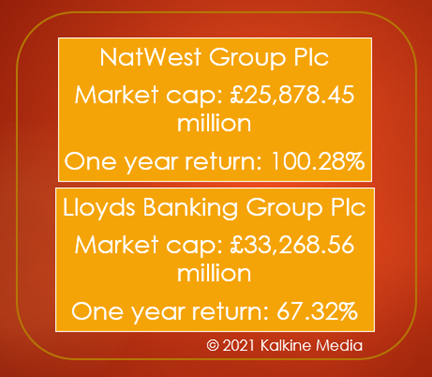 NatWest Group is a major retail and commercial banking group in the UK. Recently, the company acquired a fintech startup RoosterMoney, a pocket money app.