Telecommunications firms provide the technology that enables connection to the global networks. Telecom companies are therefore engaged in offering a range of services, including phone, mobile, internet, television services and the necessary infrastructure required to support them. 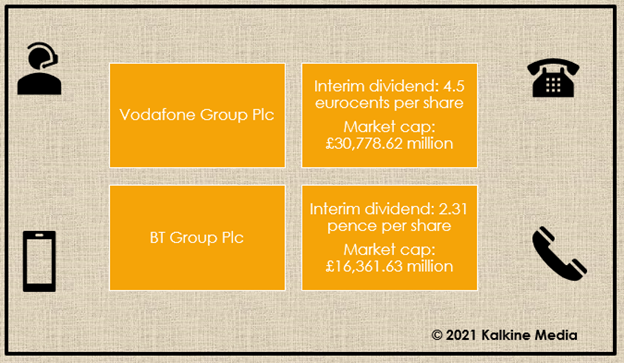 In the UK, Vodafone’s revenues grew by 6% to £2.7 billion (€3.2 billion) in H1 FY 22, primarily boosted by roaming charges and visitor revenues to the country. About 149,000 mobile contract customers were added to the business in the UK during the period.

Vodafone Group’s board declared an interim dividend of 4.5 euro cents per share to shareholders.

BT Group is one of the leading companies offering telecommunications and network services to customers in the UK. Recently, BT announced that it achieved its gross annualised cost savings target of £1 billion, 18 months ahead of the March 2023 timeline. BT inaugurated a 5,000 sq. ft. robotics research facility at the BT Labs in Suffolk to develop innovative robotics solutions aimed at accelerating the deployment of essential infrastructure.

BT Group’s declared an interim dividend of 2.31 pence per share to shareholders for the six months ended 30 September 2021.