Reabold Resources Plc (LON: RBD) is an investment company that invests in prospective oil & gas projects across the world. The company runs a low-cost, non-operator business model and invests in projects which meet its strict investment criteria. Its non-operator business model is determined by the monetisation compared to the entry price of the oil & gas projects in which it invests. The company follows a long-term strategy to re-invest capital gathered from its investments into larger projects to consolidate its business.

According to international petroleum and energy consultancy GaffneyCline, which conducted a study on its fields, West Newton field is highly prospective and has the best possible grade for low-carbon emissions from potential upstream crude oil production, with an AA rating for carbon intensity.

In 2008, Rathlin Energy (UK) Limited applied for and was awarded an oil and gas license in East Yorkshire, namely PEDL 183 from the Department of Energy and Climate Change. The license is located onshore UK adjacent to the North Sea, north of the Humber River and west of the town of Beverley.

Rathlin Energy has carried out a series of studies on PEDL 183 exploring geological and geophysical information, which included new 2D and 3D seismic surveys. In 2014, Rathlin drilled its first well on the West Newton field, which was the successful A-1 well. Rathlin was not able to obtain a full suite of logs from the well but did have sufficient data to indicate a successful discovery had been made. In 2019, Reabold acquired an interest in Rathlin, providing much of the funding for the second well, A-2, which proved highly successful. This time, a full suite of logs was acquired, and petrophysical data indicated that a substantial column of both gas and liquid hydrocarbon was found at the well at West Newton.

An in-depth analysis of the well of the A-2 well confirmed that the West Newton project has a significant oil and gas reserve rather than the gas as previously believed. 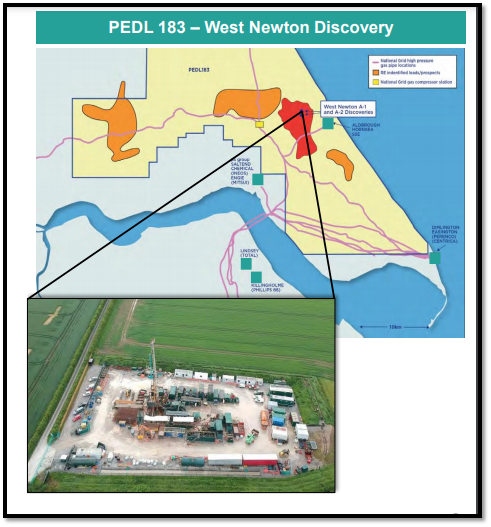 In December of 2020, the successful West Newton B-1Z well was drilled, which was 2.5 km south of the A-1 and A-2 discoveries, corroborating the view of that the hydrocarbon accumulation covered an extensive area. Additionally, West Newton is very close to the existing gas pipelines and oil and gas infrastructure and hence offers a fast pathway to monetisation, which is a key pillar to Reabold’s investment strategy.

These discoveries indicate that the West Newton field could be the largest UK onshore discovery since 1973. The license includes the conventional WNA-1 discovery along with WNA-2 and WNB-1Z appraisal wells.

In the Kirkham Abbey objective formation, the drilling of the B-1Z well found an aggregate 62-meter hydrocarbon, showing reservoir interval with the total Kirkham Abbey hydrocarbon column projected to be a minimum of 118 meters. The estimates were much higher than the earlier observations. With augmented penetrability of over 14 per cent observed on the wireline logs, which equates favourably to the A-2 well, and with the oil water contact yet to be met, the Kirkham Abbey formation has been substantially de-risked with indication of good reservoir continuity.

Recently, international energy consultancy Gaffney, Cline & Associates Limited was hired to formulate a CPR (Competent Person’s Report) in respect of PEDL183, which included the West Newton discoveries, WNA-1, WNA-2 and WNB-1Z wells. The CPR will be implemented soon after the imminent testing of WNB1-Z and WNA-2 wells. Operations at the well were progressing in line of expectation, and after the completion of the Cased Hole Logging Programme and Vertical Seismic Profiling operations on the WNB-1Z, the next phase of operations utilising a service rig will be scheduled soon.