The London Stock Exchange listed upstream oil and gas investor Reabold Resources Plc (LON:RBD) came up with a groundbreaking update from Extended Well Test (EWT) programme on its West Newton asset. Two wells, WNA-2 and WNB-1z, were included in the EWT programme. The company has also released an update of the oil and gas resources of Kirkham Abbey reservoir running through the Greater West Newton area of PEDL 183.

Reabold controls 56% interest in the West Newton oil and gas project, while Rathlin Energy Limited is the operator of the project.

The EWT programme generated a large set of data, including downhole logs, pressure data, geochemical and analysis of core samples. The test results have confirmed the substantial hydrocarbon discoveries in WNA-1, WNA-2 and WNB-1z.

WNA-2 and WNB-1z wells led to the recovery of gas and light oil/condensate to the surface, although a sustained flow rate was not achieved, and samples have been collected for ongoing geochemical tests.

The studies will include running of a wide range of reservoir stimulation treatments, which will be later applied to the West Newton wells for achieving optimum flow rates. Also, the modelling will help in finding the location and number of wells required to be drilled on the formation.

Rathlin Energy reviewed the Most Likely Median Case for estimating the resource potential within the Kirkham Abbey formation. The Company provided an update in estimated hydrocarbon in-place for West Newton discovery and for several others where drilling has not been done so far.

The table below includes the data for estimated hydrocarbon in-place over the 176,000-acre license area, including Ellerby, Spring Hill and Withernsea prospects. 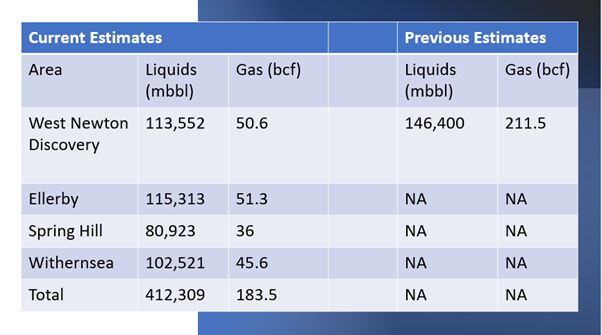 “The test programme has not only confirmed significant discoveries but provided us with an abundance of data which will now be used to establish the optimum drilling and completion techniques for oil and gas production at West Newton. The B1-Z and A-2 wells are available for stimulation to achieve near term flow, and we already have permissions in place to drill the next well on the field”, Mr Oza commented on the results.

Mr Oza also highlighted that the Company remains in a robust funding position and will provide further updates as the project moves forward.

The discoveries are significant as estimated in-place hydrocarbon resources increased to 412,309 mbbl and 183.5 bcf from its 2019 estimates of 146,400 mbbl and 211.5 bcf. The Greater Newton Area is confirmed to hold material resources, and now the assessment for optimum method of production is being done using modelling methods. The Company could get near-term production from WNA-2 and WNB-1z.