WeWork’s Debacle: A Big Corporate Lesson For The Businesses

Workspace being its craft, WeWork was formed in 2010 to create spaces, right from private offices to whole headquarters. Flexible workspace has been a market-validated real estate solution that has been around for decades, and WeWork’s member experience does have the power to make an impact on it.

But off late, things seemed going haywire for the Company, financially, competitively and its failure to deliver long-term commitments. What has worsened the scenario is the recently reported threat of a huge lay-off, driven by losses. Let us delve more into the issue:

WeWork In a Nutshell

WeWork, a commercial real estate company based in American, delivers shared workspaces for companies which are providing services for other enterprises and for technology start-ups. WeWork, its parent company being The We Company, designs and builds virtual  and physical combined spaces and office services for companies  and entrepreneurs.

According to its Investor Presentation for October 2019 (released 8 November 2019): 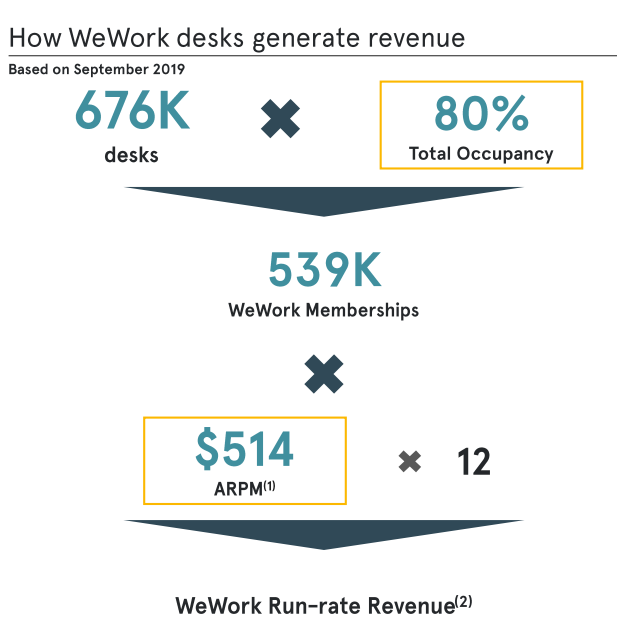 SoftBank Group, a Japanese multinational conglomerate holding company, is WeWork’s largest shareholder. In July 2017, both the companies announced a joint venture (JV) aimed to bring WeWork's transformational platform of space, community, and services for companies of all sizes to Japan, wherein they would own 50% of the JV each.

More recently in October 2019, the Company and SoftBank announced an agreement under which SoftBank committed to providing significant funding (including USD 5 billion in new financing and the launching of a tender offer by SoftBank of up to USD 3 billion for existing shareholders) to WeWork. Further, WeWork will have significant liquidity to execute its business plan, as SoftBank is accelerating an existing commitment to fund USD 1.5 billion.

However, the market has been humming that the fallout from We’s collapse has been brutal, with cash running out and lay-off’s in the discussion. However, this is just the tip of the iceberg, as WeWork’s much-awaited IPO was delayed in September, adding on an additional problem for the Company, even after it SoftBank had agreed to a ~USD 1 billion parallel private placement offer at the IPO price.

Experts believe that the IPO was delayed because of the drop in the valuation targets of Company, well below its private valuation. Moreover, the massive losses and its path to profitability has been seen with much scepticism globally, with several experts regarding the losses ahead of the IPO to be the second deepest losses in history the year before going public.

Remaining under investor scrutiny after a failed IPO, CEO Adam Neumann resigned in September, and vice-chairman Mr Sebastian Gunningham and Mr Artie Minson, co-president and chief financial officer, filled in the position while the hunt of a new permanent chief executive continues.

Mr Neumann, however, would remain in his role as the non-executive chairman.

According to some media sources, WeWork would have run out of cash completely by the end of October 2019, if it had failed to receive the new financing from SoftBank (who emerged as the saviour, investing some additional billions in the Company and taking a much larger share).

A Probable Lay-Off on The Cards?

Worsening the situation for WeWork is the new buzz that the Company is on its way to cut at least 4,000 jobs (or more) in a bid to achieve financial stability, expected to be officially announced shortly. The lay-off is likely to remove ~2000 employees from the Company’s main office-space renting business, and a few employees are projected to leave the Company, on the back of a fear the Company might shut down, for good. But will it? Time will answer.

An Official Inquiry Hovering Over the Transformative Office Space Start-up?

Incurring heavy losses, a delayed IPO, debated relationships with its biggest shareholder, and a lay-off in radar, WeWork is likely to go under the scrutiny of official regulatory controllers, given the contemporary times’ belief that clarity is essential.

According to sources constantly digging deep into the WeWork debacle, the Securities and Exchange Commission has begun scrutinizing the corporation over concerns that it had been misleading investors ahead of its IPO. The investigation is apparently only in the preliminary stages, so allegations and potential conflicts of interests, if any, are yet to be disclosed.

What Does The WeWork Debacle Teach Businesses?

Business models are art for every business, which needs to be designed with the utmost care and vigilance. At WeWork, competition & technology and cyclical demand are two critical elements of the business model, which might not have met customer’s sentiment. The functionality of the space may not have seemed entirely innovative, making people believe that local independent co-working spaces could easily compete with the start-up.

Discussing the element of cyclical demand, during an inevitable phase of recession, the Company’s revenue might drop as customers would either give up on co-working space or rationalize their usage. What needs to be noted here is the fact that in this situation too, the Company’s obligations would remain the same.

Therefore, these elements need to be feasibly planned by every business to avoid a slump phase.