Anglo African Oil & Gas PLC (AAOG) is a London-headquartered oil and gas and mining company. The company offers a wide range of services, including extraction, exploration, operations, production, management, and development of oil and gas natural resources. It owns and operates Petro Kouilou and holds interest in the Tilapia Field that is located to the offshore of the Republic of the Congo and located in the Lower Republic of the Congo Basin and produces oil and gas. The group also holds, owns, and operates onshore production and storage facilities, producing oil and natural gas assets and resources. The company has its operations in the UK and the Republic of the Congo.

On 12th November 2019, the company exercised a rig option (agreement) to carry out drilling options for Tilapia 103C-ST. The Company owns a fifty-six per cent interest in Tilapia. The drilling operations are expected to commence either in Q1 or Q2/2020 at TLP-103C-ST. However, the risk factor cannot be ignored in drilling-related activities.

Earlier in October, the company announced that it might obtain up to $25 million in offtake and advance financing for the advancement of the Tilapia field in the Republic of the Congo as it had entered into a non-binding indicative term sheet with an international oil marketing and trading company. However, the agreement is dependent on its completion and on bringing well TLP-103C-ST into production and would help the company in avoiding the need for further equity financing and subsequent dilution for shareholders.

Although the top-line performance has improved the bottom-line performance has declined for the period. The group expects the 2nd half of the year to witness a considerable reduction in non-standard operational expenses. The company is looking forward to increasing its production through development in Tilapia and expand its surface facilities through a field-development plan which include ten additional wells.

Daily Chart as at 13-November-19, before the market closed (Source: Thomson Reuters)

On 13th November 2019, while writing at 10:35 AM GMT, Anglo African Oil & Gas PLC shares were clocking a current market price of GBX 2.90 per share; which remained flat in comparison to the last traded price of the previous day. The company’s market capitalisation was at £11.51 million at the time of writing.

Smiths Group Plc (SMIN) is a London, the United Kingdom based technology company that uses its various technological capabilities to cater to various industries such as Medical Technology, Security and Defence, General Industry, Energy as well as Space and Aerospace. In the year 2000, the name of the business was changed to Smiths Group Plc. The group develops, manufactures and sells control systems and instrumentation for industrial applications to customers based in over 200 countries and territories around the world that enable industry, improving healthcare, enhancing security, advancing connectivity and supporting new homes.

On 13th November 2019, the company made a press release to announce a trading statement for the first quarter of the year ending 2020. The company reported that the underlying revenue from the group’s continuing operations for the quarter was at an increase of 11 per cent. The company reported that there was organic growth in Flex-Tek from both aerospace and industrial products. It was also highlighted that the company anticipates a year on year growth to move in the direction of the first half and to also result in a evener balance in overall performance between the first and second halves of the year. 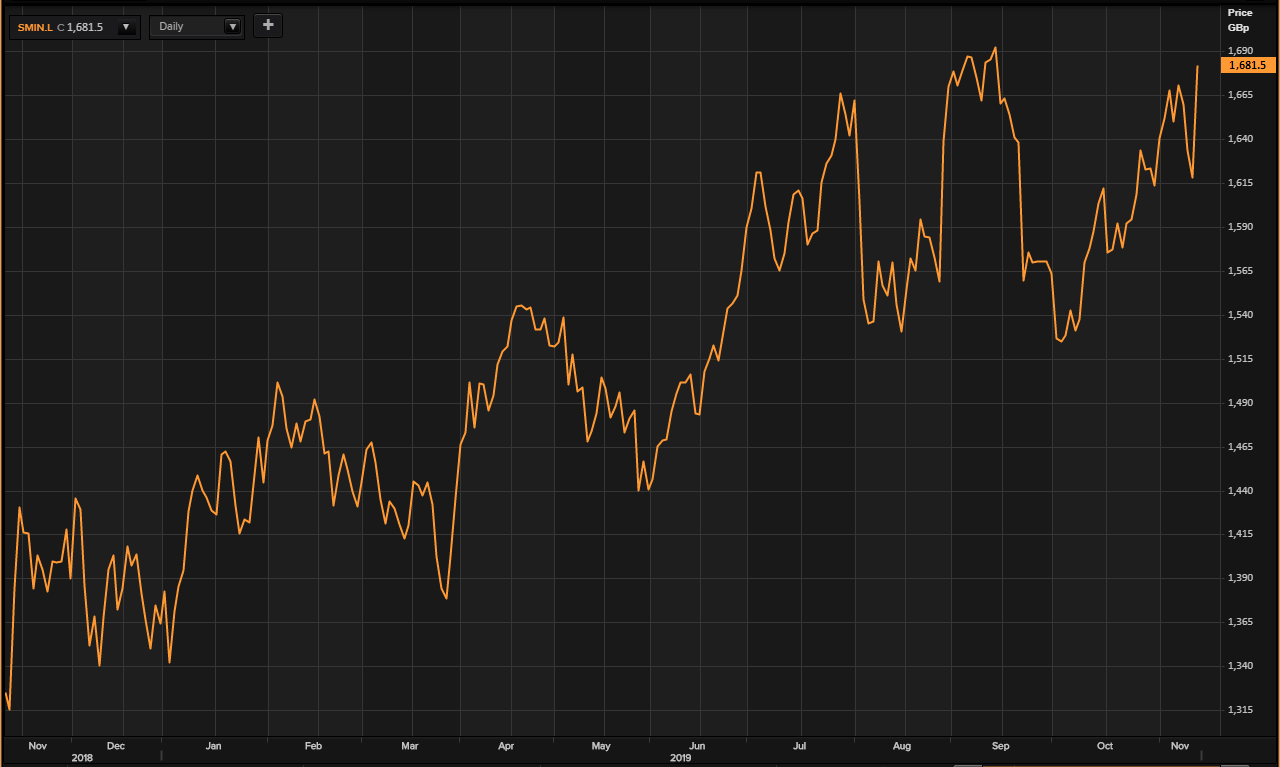 The beta of the Smiths Group Plc’s stock has been reported to be at 0.70. This means that the company’s stock price movement is less volatile in its trend, as compared to the benchmark market index’s movement.