Another offering from the company, Rizikon, is a digital security analysis tool which gauges risk, empowering the client to quantify their company's digital vulnerability and gives them overall feedback in terms of rating based on risk.

Rizikon tracks the probabilities of the success rate of cyber assault on client's network and systems, utilising its algorithm known as Dynamic Attack Path Analysis (DAPA). Nixer, another product offering from the company, is a denial of service (DoS) platform, which provides an additional web layer of online services.

The company launched a new range of machine-learning based security and anti-fraud software product, Nixer CyberML, which can help companies with a lucid and quick way to build these features into applications. The tool is capable of advanced security and cybercrime challenges, such as identifying and dispensing with compromised accounts, and denial of service attacks. This tool facilitates adding of machine learning-based detection to online banking and e-commerce applications, that can identify the good and the bad user behaviour. The deployment of this technology is quick and reliable, as it uses the existing architecture and code.

The company’s trading for the fiscal year 2019 remains in line with expectations. As the company adopted IFRS15 with respect to revenue recognition from the SaaS (Software as a Service) contracts of the company, the revenue for fiscal 2019 is expected to be lower than expectations. However, this is just a temporary phase; the company shall see a corresponding increase in revenue in future. Though there wasn’t any significant effect on the cash flow.

Crossword is looking forward to loan agreements of £1 million to take care of the company’s mid and near-term cash requirements; however, this is subject to approval from shareholders. These funds shall be utilised for general working capital purposes. The tenure of the loan will be three years with a fixed rate of 12 per cent interest per annum.

On 26th November 2019, while writing at 11:35 AM GMT, CCS shares were clocking a current market price of GBX 460.00 per share; which was less by 4.16 per cent in comparison to the last traded price of the previous day. The company’s market capitalisation was at £22.76 million at the time of writing.

Based in Uxbridge (United Kingdom), Corero Network Security Plc (LON: CNS) is a software and computer services company. It is into the business of providing solutions for Distributed Denial of Service (DDoS) security attacks and other network solutions to facilitate the internet.

The various solutions and products of the company such as Network security solutions and the DDoS play a vital role in upgrading the existing defence systems and risk mitigation systems as well as making internet technology workable for all types of computer systems. The products or solutions of the company are combined with the firewall as a primary safety protocol, as it acts as the first line of defence against any attack.

Smartwall Threat defence system, a product of Corero Network Security, provides comprehensive security, by automatically annulling any potential threats, enabling a good user volume throughput seamlessly, at the same time allowing the applications, services, and systems to synchronise and stay connected to the network, in progression, even at the time of attack on the system. This defence system comes in various variants such as Smartwall NTD 1100, Smartwall NTD 280 and Smartwall NTD 120. This system also has a virtual variant known as SmartwallvNTD. These variants of the Smartwall Threat defence system can be delivered-as-a-service through an online platform/portal owned by the company known as the Smartwall Service Portal.

SecureWatch Analytics, a web-based analytics tool, provided by the company, can create simple and robust dashboards to gather information and create and represent useful insights and data related to DDoS attacks.

The company managed to secure orders worth over $1 million. The company got orders from new customers facilitated by the Juniper resale partnership as well as two separate 100Gbps orders, for SmartWall DDoS security products.

The company announced a trading update for the six-month period ended 30th June 2019 on 16th August 2019 with a viewpoint of financial performance for FY19.

The company’s revenue was impacted as the expected pipeline orders of Juniper were not converted and hence the revenue slowed down, but the company is still hopeful and looks forward to robust growth in the pipeline and the volume. 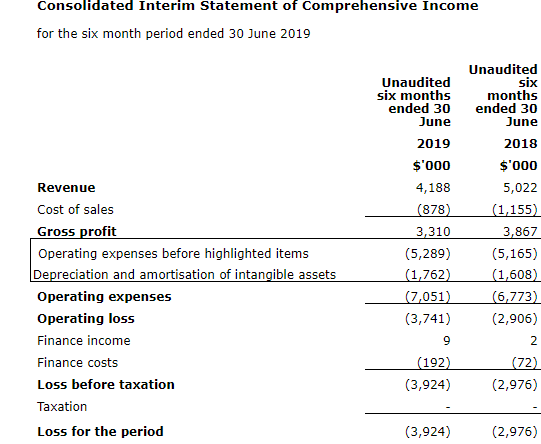 Moreover, the company has not proposed any dividend (interim) during the period, but the company is hopeful of a positive performance in the fiscal year 2019.

On 27th November 2019, while writing at 01:28 PM GMT, CNS shares were clocking a current market price of GBX 3.30 per share; which was less by 4.34 per cent in comparison to the last traded price of the previous day. The company’s market capitalisation was at £13.90 million at the time of writing.