In the Aviation services segment, the company is involved in the activity of delivering outsourced aviation services for military as well as commercial purposes. The company’s capabilities within this segment include Regional services, Airline services, Helicopter services as well as special mission services. With the connections and connectivity division of the group, the company engages in the provision of high connectivity equipment, that could be used anywhere in the world. Within this segment, the company provides a host of services such as Aerospace communications, Aerospace connectivity, Electrical as well as Electronic equipment, Satellite Communications (SATCOM) and Wireless services. The capabilities and services that the company provides through these include Aircraft Clocks, Aircraft Lights, Avionics systems, Antenna, Cockpit and Cabin connectivity, Airborne Tetra, Antennas for communication as well as navigation, Lightweight telescopic and tactical masks, Counter IED Systems, Interference cancellation systems, Microwave Antennas, Specialist Technical software as well as wireless coverage amongst many more.

On 25th July 2019, the company issued a press release to announce its interim results for the six months ended 30th June 2019. The primary highlighting point for the company, within the results were the excellent performance by the group during the period, which led to a GBX 165 per share, cash acquisition offer made by Advent International. In terms of the underlying results, the company reported an organic revenue growth of 11 per cent for the first half of the current year, which was exactly the same as of H1 FY 2018. The revenue for the period was reported to be at £1028.9 million for the first half of the year, as opposed to £924.5 million during H1 FY 2018. The Underlying operating profit for the period was reported to be at £107.1 million, a year on year increase as opposed to £95.5 million in H1 FY 2018. The reported operating margin for the period stood at 10.4 per cent, a marginal increase as opposed to the operating margin during the first half of the previous year, which stood at 10.3 per cent. The underlying earnings per share were reported to be at GBX 3.2 per share, a year on year increase from GBX 2.0 per share reported in H1 FY 2018. As a reflection of the good underlying performance during the period as well as in accordance to the new progressive dividend policy of the company, the management of the organisation proposed the interim dividend of GBX 0.4 per share. 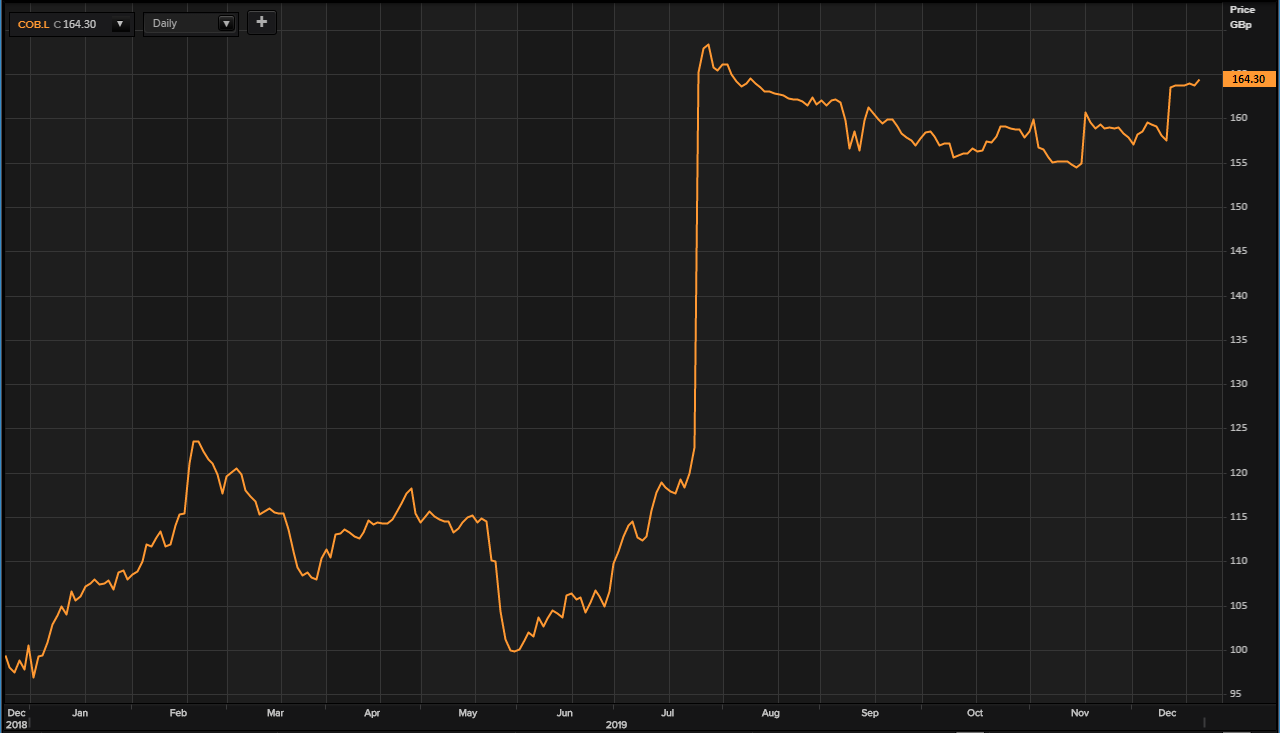 (Source: Thomson Reuters) Daily Chart as on 23-December-19, before the close of the market

As on 23rd December 2019, at 12:45 P.M Greenwich Mean Time, while writing, Cobham Plc’s price of the stock was reported to have been trading (under special conditions of a bid situation) at GBX 164.30 per stock on the London Stock Exchange, an increase in the value of 0.37 per cent or GBX 0.60 per stock, as opposed to the last day’s closing price, which was reported at GBX 163.70 per stock. The company’s market capitalisation stood at a value of GBP 3.914 billion in relation to the present market price of the share of the company.

The Cobham Plc share has depicted an upside return in the previous half-year, of approximately 55.96 per cent from the price of the stock of GBX 105.35 per stock that the company’s stock achieved on June 24, 2019. Cobham Plc’s stock had also gained value by 3.17 per cent, in the previous month from the price of GBX 159.25 per stock when the markets closed on November 22, 2019.

Advent International is one of the world’s biggest private equity companies that operates across four continents with a professional capacity of more than 400 employees as well as more than 200 investment experts. The company has made 350 private equity investments worth US$ 46 billion, spanning a total of 41 countries. The company’s primary objective is to make investments that can lead to an increase in the shareholder value through sustained revenue and earnings growth. Geographically, the company has made investments in Hong Kong, Mumbai as well as Shanghai in Asia apart from France, Germany, Luxembourg, Spain and the United Kingdom within Europe, in Brazil, Colombia, Mexico and Peru spanning Latin America as well as in the United States of America.

The company’s outreach ranges across sectors like Business and Financial Services in areas such as B2B & information services, Back-office administration & services, Financial institution carve-outs as well as Payment processing. Other than Business and Financial Services, the company also has investments in Healthcare in spaces like Healthcare services and Information technology, Pharmaceuticals, life sciences & medical devices. In the Industrial sector, the company’s portfolio has investments in the areas of Building products/distribution, Capital goods, Chemicals & materials as well as Energy. The company also has investments in sustainable areas such as Retail, Consumer and Leisure and in technological areas like Software, Data, which has become one of the most important assets in the world, tech and communication services and Other technological spaces.

As reported earlier, Cobham Plc had received a cash offer worth GBX 165.00 per share for acquisition by Advent International in the month of July. An agreement had been reached upon by the two companies involved, but movement in the completion of the deal had been halted by the orders of Business Secretary Andrea Leadsom so that the government could address any national security concerns raised by the takeover as there were fears amongst some sections of the government as well as civilians regarding the handing over of UK’s biggest military contractors to an overseas power.

As per various news reports on 22nd December 2019, the government is all set to give the go-ahead for the completion of the acquisition which has been valued at around £4.00 billion, as Business Secretary Andrea Leadsom reportedly said that this merger would not compromise on the National Security of the United Kingdom. One of the fears had also come from the ministry of defence, which felt that the military information that could be held on the company’s systems might be undermined if Advent decided to sell the business further. As a response to this, the Business Secretary maintained her statement that all the decisions had been made after taking consultation responses and further advice from various experts which included the likes of defence secretary, the deputy national security adviser and government officials across multiple departments.