Fevertree Drinks Plc is the United Kingdom-based leading supplier of carbonated mixers for alcoholic beverages. The company launched its brand first in the United Kingdom in 2005 and has ever since expanded its operations into more than 70 countries. The company produces and sells premium mixers for Gin, Vodka, Rum and Whiskey, and distributes them widely through retail outlets, restaurants, hotels, bars as well as cafes.

The shares of the company have a listing on the London Stock Exchange in the Alternative Investment Market (AIM) segment. There the shares trade with the ticker name FEVR. 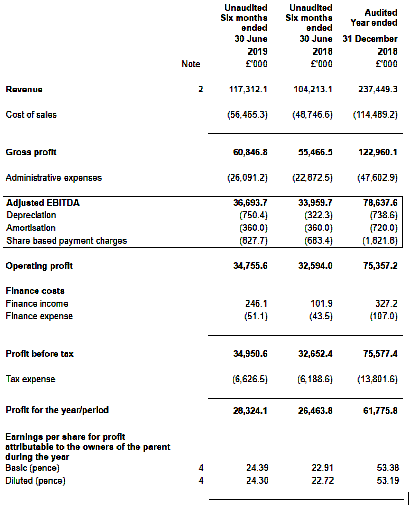 Price Chart as on 05 November 2019, before the market close (Source: Thomson Reuters)

The company is well-positioned to leap into its next phase of growth with a strong geographical footprint and a superior portfolio of high-quality carbonated mixers. The company has strategic agreements with crucial alcoholic beverage producing companies of the world which it believes would bring it significant global opportunity and would be the key to its next phase of development.

The company though remains mindful of the harsh operating environment because of the economic outlook for the next year and beyond. The management is, however, hopeful that it will be able to meet its guidance for the full year.

Derwent London Plc is the United Kingdom domiciled Real Estate Investment Trust (REIT). As of 30 June 2019, the company owns 84 buildings in its commercial real estate portfolio which are predominantly located in central London and are valued at approximately £5.4 billion (including joint ventures), making the company the largest London focused Real Estate Investment Trust in the United Kingdom.

As part of its commitment to a sustainable environment, the company in October 2019 became the first Real Estate Investment Trust (REIT) in the United Kingdom to sign a Green Revolving Credit Facility. Other than that, the company also launched its own Green Finance Framework and signed the Better Buildings Partnership's climate change commitment.

The company has been a recipient of many industry awards namely the CoStar West End Deal of the Year 2019 for Brunel Building, the Westminster Business Council's Best Achievement in Sustainability award and the EG Offices Company of the Year for 2019.

The company on 04 November 2019 came out with a news update about its pre-letting of three floors of its central London property of Soho Place W1 to Apollo Management International, LLP.

Price Chart as on 05 November 2019, before the market close (Source: Thomson Reuters)

The company has been able to pre-let almost all the 1 Soho Place property two years ahead of its completion and that too with fifteen-year lease agreements. This demonstrates the strong market dynamics of the pre-letting market in London. The company has another property called Elizabeth, that is lined up for the next year. Given the market scenario, the company is hopeful of repeating the current success next year as well.