Bacanora Lithium PLC (BCN) is a London-headquartered, AIM-listed lithium development company, which seeks to commercialise the Sonora Lithium Project in Mexico and develop the next major lithium project in the country. The group is one of the few pure-play lithium development groups listed on the London Stock Exchange. A feasibility study of the Sonora Lithium Project confirmed favourable operating costs and positive economics, with an internal rate of return of 26.1% and pre-tax project net present value of $1.253 billion. The operations of the company are differentiated in three segments, namely Mexico, Germany and it’s Head Office.

The company on 28 June 2019 announced that it had signed Investment Agreement and Offtake Agreement with Ganfeng Lithium, which would result in Ganfeng acquiring 29.99% of Bacanora and 22.5% of Sonora Lithium Ltd. The group on 14 October 2019 announced the completion of the strategic investment and informed it had received the £21,963,740 of funds from Ganfeng in exchange for equity.

As the company continues to strengthen its management and operations teams in preparation to advance into development and construction, general and administrative costs increased by US$1.5 million, which resulted in an operating loss of US$4.4 million as compared with a loss of US$3.2 million in H1 FY 2018. The group incurred finance costs of US$2.1 million and the group reported costs related to completion and maintenance of debt financing. Property, plant and equipment rose to US$29.2 million at the end of the period from US$26.4 million at 30 June 2018, while current liabilities reduced by US$6 million due to the settlement of accounts payable. The total net assets of the group declined to US$38.9 million at 31 December 2018 (US$42.6 million at 30 June 2018), while closing cash balance of the group was US$20.5 million at the end of December 2018 (US$13.2 million at 30 June 2018).

The company aims to produce final lithium products in the lowest operating cost quartile by developing a fully integrated mine and downstream processing facility, while the demand for battery- grade lithium demand continues to be driven by electric vehicle (EV) growth. However, price of lithium is impacted by many factors beyond the control of the company and fluctuates widely, and profitability of the operations is dependent upon the market price of the mineral, financials of the firm can also be impacted by an adverse shift. Future price declines can have a considerable impact on the business and financial condition of the group and make commercial production uneconomical, which might lead to a reassessment of the feasibility of projects. As the lithium market matures, short term shocks can be expected, like increase in production from other producers or cooling demand in China, which might result in a volatile price of battery-grade lithium carbonate in the market. Amid concerns over demand for lithium over an escalating trade war between the US and China, and reflecting a surge in supply, lithium prices have fallen 12.3 per cent this year, leading to delay in capex in the sector by big players.

Ashmore Group PLC (ASHM) is a London-headquartered specialist investment management company, which is focused on the emerging markets and offers a wide range of different equity, debt and regional investment strategies. In structured products, segregated accounts and pooled funds, as at 30 June 2019, the group managed $91.8 billion worth of assets. The group has a team-based approach to investment management and offers several investment themes including Alternatives, Equities, Corporate Debt, Local Currency, External Debt and Multi-Asset. The operations of the group are differentiated in three geographical segments, namely the United Kingdom, the United States and Other.

In the first quarter ended 30 September 2019, as net inflows of $2.4 billion were offset by the negative investment performance of $2.3 billion, assets under management were broadly flat over the period. There was a small net outflow from intermediary retail clients, and a wide range of institutional clients accounted for the net inflow, while the net flows were highest in corporate debt, equities, local currency, external debt and blended debt. With net inflows in every investment theme except alternatives, the company reported that new client mandates delivered broad-based flows in the first quarter while existing clients continued to raise their allocations to Emerging Markets, as the quarter continued to see demand for the decent risk-adjusted returns available across Emerging Markets. 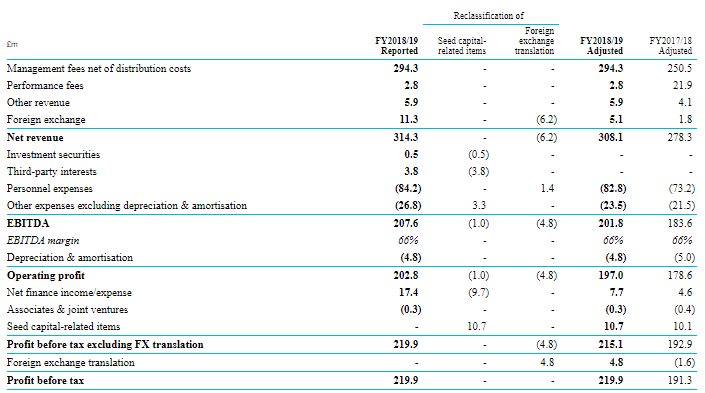 Due to higher foreign exchange translation revenues and 17% growth in net management fee income, net revenue rose by 14% to £314.3 million (FY2017/18: £276.3 million), while adjusted net revenue increased by 11% to £308.1 million. Driven by the market performance of $6.9 billion and net inflows of $10.7 billion, assets under management increased by 24%, or $17.9 billion, to $91.8 billion. The group reported that compared with the previous year, gross redemptions of $13.1 billion remained stable in absolute terms, and redemptions remained at a normal level with no patterns. On an adjusted basis, EBITDA increased by 10% from £183.6 million to £201.8 million with an adjusted EBITDA margin of 66%, while including the effects of foreign exchange translation and seed capital-related items, EBITDA increased by 14% to £207.6 million (FY2017/18: £181.5 million). Statutory operating expenses rose by 13%, or £13.2 million, compared with the prior year, while total adjusted operating costs were £115.8 million (FY2017/18: £100.4 million). As a result of the strong growth in net revenues and limited cost inflation, statutory profit before tax was 15% higher than in the prior year to £219.9 million, while adjusted profit before tax excluding foreign exchange translations was £215.1 million. On a diluted basis, earnings per share rose by 18% to 25.0 pence and basic earnings per share was up by 18% to 26.6 pence, reflecting a lower effective tax rate compared with the prior year and strong growth in profit before tax. The company continued to hold no debt on its balance sheet and total equity attributable to shareholders of the parent at the end of the period was £843.2 million. The group recommended a final dividend of 12.10 pence per share for the year, in line with its intention to re-establish dividend cover of at least 1.5x statutory earnings.

The company had shown good financial performance in the financial year 2019. Both the top-line and the bottom-line performance improved for the period. The group reported that investor risk aversion and worsening sentiment might continue as growth in China and Europe, as well as in the US, is starting to be affected by the prolonged trade war initiated by Donald Trump. Investors might decide to change their allocation decisions towards the safety of the developed country, as a threat of recession has increased in recent times, even as central banks shift their stance towards accommodative monetary policy. A stronger dollar and political challenges in many emerging economies pose a risk to return in the asset class, which can impact the financials of the group, as investors might not invest in the market fearing asset price volatility. Even though central banks in emerging markets have the capacity to provide monetary policy stimulus if required, and valuations across fixed income and equity asset classes looked attractive, the risk from the developed economies can spill over to their countries, which can lead to capital flight and exacerbate the financial problems in the country.