The United Kingdom-based Barratt Plc is a holding company engaged in the business of acquiring land, planning, designing, developing, constructing and selling the residential property and commercial property as well. The group's business operations are Housebuilding and Commercial developments. Around 99 per cent of the group's total revenue comes from housebuilding segment. Major brands of the company are Barratt Homes, David Wilson Homes and Barratt London.

Total homes completed including joint ventures increased to 17,856 homes for the year ended 30 June 2019 as compared with the financial year 2018 of 17,579 homes, with wholly owned completions increased by 2.6 per cent to 17,111 homes as compared with the financial year 2018 of 16,680 homes. Operating margin surged by 1.2 per cent to 18.9 per cent against the 17.7 per cent in FY18, with underlying margin increased by around 70 bps, primarily because of the margin initiatives of the company. The projected Profit before tax is likely to be ahead of market expectations at approximately £910 million as compared with the financial year 2018 of £835.5 million. For the 10th year in a row, the company received the HBF’s (Home Builders Federation’s) maximum 5 Star consumer satisfaction rating, due to the commitment to quality and consumer service. As on June-30-2019, the group’s total forward sales (including JVs) reported a surge of 20 per cent at £2,604.1 million against the £2,175.7 million recorded in the year-ago period.

As at 30 June 2019, the company’s net cash balance increased to £765 million as compared to £791.3 million on June 30, 2018, reflecting the overall solid trading, the timing of land acquisition and receipts related to joint ventures.

The company is further focussed for margin improvement and delivering a 3% to 5% volume growth over the medium term, land acquisition at a minimum 23% gross margin and expected to deliver a minimum of 25% Return on Capital Employed (ROCE). However, scheduled departure of Britain from the EU bloc has invoked the level of economic and political challenges in the near term.

The company’s current macro-economic conditions are unfavourable due to the Brexit uncertainty. The group’s projected operating profit for 2019 is near the lower end of the array of current market forecasts.

Superdry (SDRY) is an apparel brand with the main focus on providing good quality products. The company’s products use British style with a mix of Americana and Japanese inspired graphics. The company’s products are known for its quality fabrics, exclusive detailing, authentic vintage washes, hand-drawn graphics and custom fits for unique styling. The company had its operations in 46 countries and is operating 515 Superdry stores.  It owns 139 stores within the UK and 168 stores outside the UK. The company also has franchised and licensed 208 stores and sell to more than 100 countries globally via Superdry.com.

On a statutory basis, net cash position decreased by 52.6 per cent to £35.9 million against the £75.8 million in FY18. Loss before tax was £85.4 million, a huge decline from the previous year profit before tax. Basic loss per share stood at 120.3 pence.

Yourgene Health PLC (YGEN) is a Manchester, the United Kingdom-based company, which provides the molecular diagnostics business. The company offers the commercialization and development of gene analysis techniques for pre-natal screening and additional clinical applications in the initial detection, treatment and monitoring of disease. 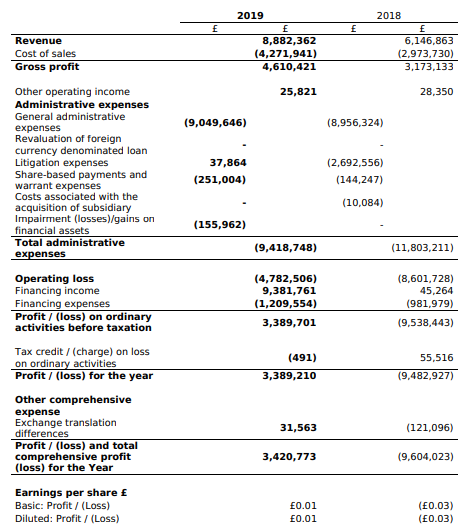 For the year ended 31 March 2019, the reported revenue of the company increased by 45 per cent to £8.9 million as compared with £6.1 million of the financial year 2018. Gross profit surged by 45 per cent to £4.6 million against the £3.2 million in FY18. There was a decline of 29 per cent in adjusted EBITDA loss to £3.1 million, as compared to £4.4 million in FY18. Operating loss stood at £4.8 million, a 44 per cent decrease from the previous year data. For the year 2019, the total comprehensive profit was £3.4 million from the loss for the period 2018 of £9.6 million. Basic and diluted earnings per share stood at £0.01. Net cash excluding borrowings stood at £1 million as compared with the financial year 2018 net debt of £11.9 million. Its initial oncology product is in a soft launch phase with several European and UK clinical partners.

The group completed an equity fundraising in April 2019 with a gross proceed of £11.8 million and £8.8 million worth of EV (enterprise value) through the acquisition of Elucigene.

With the increasing international presence, de-risked business and the recently acquired Elucigene operations, the company is comfortably placed to realise its potential. The company now have an international genetics business that will continue to increase very rapidly in the coming years.

On 12 July 2019, YGEN shares closed at GBX 11.50 and decreased by 2.13 per cent as compared with the previous day closing price. Stock's 52 weeks High is GBX 16 and 52-weeks Low is GBX 6.42. The group’s stock beta stood at 2.29, reflecting significantly higher volatility against the benchmark index. Total outstanding market capitalisation stood £68.59 million.