Dunelm Group PLC (DNLM) is a UK based general retailer company and operates in the UK's homeware market. Dunelm and Dorma are the key brands of the company. The company has around 170 stores and a total headcount of around 10,000 workforces. The company offers products like furniture, curtains, blinds, bedding, rugs and decors through its platform and facilitates multichannel convenience through the online, mobile, catalogue, and telephone orders.

In the 13-week period ended 28 September 2019, due to continued market share gains and the weak comparative period last year, total Dunelm growth was 7.5% including the benefit of new stores, while like for like (LFL) sales increased by 6.4% in the first quarter. Reflecting the continuation of sourcing gains and lower levels of clearance stock compared to the prior year, gross margin improved by approximately 130bps in the first quarter. Weekly average net debt during the quarter was Â£5 million, and net debt as at 28 September 2019 was Â£24.0 million (FY 2019: Â£109.0 million). 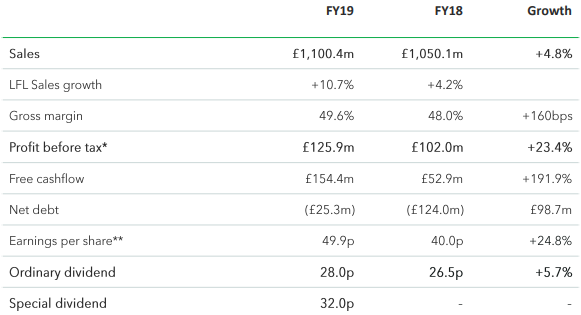 The company reported that the FY 2019 final ordinary dividend and previously announced special dividend would be paid during the second quarter, while foreign exchange headwinds towards the end of the financial year will likely offset improvements made in gross margin in the first half. Customers behaviours and expectations have changed, and as consumer confidence remains low as the country enter Brexit, the UK retail sector continues to experience high levels of volatility and uncertainty. As the company experiences a reduction in traditional barriers to entry, many new retailers are entering the market, and the landscape is also rapidly changing. The company remains cautious on the outlook for FY 2020 because of pressures like increasing food inflation and political uncertainty.

XP Power Limited (XPP) is a Singapore-based manufacturer and developer of critical power control mechanisms for the electronics sector, which offers power solutions, including DC-DC converters and alternating current (AC)-direct current (DC) power supplies. The company's operations are differentiated into three geographical segments: Europe, North America and Asia. Currently, the group is a member of the FTSE All-Share and FTSE techMARK index.

In H1 2019, revenue surged by 6% toÂ Â£98.9 million as compared with the corresponding period of the last year. On a reported basis, Own-design XP product revenues surged by 6% toÂ Â£77.3 million against the Â£72.6 million in H1 FY18 and represented 78% of total revenues. In the first half of 2019, adjusted profit before income tax wasÂ Â£16.6 million, a decrease of 18% from the previous year same period data, whileÂ reported profit before tax stood atÂ Â£12.9 million. Reported profit attributable to equity holders reduced by 29% toÂ Â£10.3 million as compared to Â£14.6 million in H1 FY18.Â Adjusted diluted earnings per share stood at 69.2 pence, a decrease of 17% from the same period in 2018.Â Reported diluted earnings per share was 52.8 pence in H1 FY19. For the first half of 2019,Â dividend per share surged by 6% to 35 penceÂ against the 33 pence in H1 FY18, reflecting the confidence, the Board has in the company's longer-term prospects.

While growth in the Industrial, Technology, and Healthcare markets remained healthy, this was offset by a cyclical slowdown in the Semiconductor Equipment Manufacturing market and pressure on the gross margins, resulting from the surge in the United States trade tariffs on Chinese manufactured goods, historic component product mix and price inflation. The group anticipate the combination of the current design wins & the cyclical recovery to produce significant progress in this sector. The company remain conscious of potential risks arising from the international macroeconomic challenges and continue to anticipate an improved revenue performance in the H2 FY19 as a result of the surge in the order book since the year-end.

N Brown Group PLC (BWNG) is a Manchester, the United Kingdom-headquartered digital fashion retailer, which focuses on catering underserved customer groups, specifically in size 20+ and age 50+. The group designs, sources and creates its product offerings by itself, and has an extensive range of products, predominantly homewares, footwear and clothing.

Due to the impact of the closure of the store portfolio in the prior year, the shift in focus away from the USA and the continued managed decline of the legacy offline business, product revenue declined by 9.3%, which led to a 5.4% fall in the group revenue to Â£432.9 millionÂ in H1 2020. As operating expenses before exceptionals decreased by 9.5%, statutory operating profit rose by 151.9% to Â£14.7 million, reflecting the exceptionals of Â£65.4 million recorded last year. Operating profit before exceptionals rose by 7% to Â£39.7 million, while adjusted EBITDA increased by 4.0% to Â£54.1 million. Adjusted profit before tax rose by 3.9% to Â£31.8 million from Â£30.6 million in the prior year, while statutory profit before tax was reported at Â£18.8 million. Statutory earnings per share were 4.95p (H1 2019: a loss of 9.14p), while adjusted EPS rose to 8.87p (H1 FY19 earnings per share: 8.37p).

The company focuses on bringing down net debt, invest in the business and deliver shareholder returns by generating sustainable free cash flow and deliver profitable digital growth. The company has aimed at maximising the UK core market before leveraging its international opportunity and has completely relaunched its social media strategy, with encouraging results in its initial days. To streamline the digital user experience, it seeks to deliver improvements to the customer experience, which would help in building a crisper, clearer brand proposition for its customers. Though the full-year expectations were unchanged, it remained mindful of significant uncertainties surrounding Brexit and continued challenging macroeconomic environment.