Petrofac Limited (PFC) is an oilfield services company that provides integrated services to the production and processing industries. The group builds and designs oil and gas facilities; manages, maintains and operates facilities on behalf of its consumer and trains personnel.

They design, build, operate and maintain oil and gas facilities, which are delivered through a range of commercial models flexible in nature, enabling them to respond to the different needs of each client and helping them to enhance the value creation of assets across the oil and gas life cycle.

The company also co-invests and develops in infrastructure and upstream projects. Petrofac offers engineering services, including feasibility and conceptual studies and FEED (front-end engineering and design) to consumers across the oil and gas asset life cycle, on either an integrated or stand-alone basis. The company operates through a network of operational centres, offices and training facilities worldwide.

Engineering & Construction results are in accordance with management expectations, with the top line for the full year expected to be around US$4.5 billion and net margins a tad lower than expected. The company has made steady progress regarding the portfolio of projects. The company got new orders worth US$1.6 billion in Engineering & Construction in the year to date (H1 FY18: US$1.6 billion), including a lump-sum engineering, procurement and construction (EPC) contract for the Ain Tsila Development Project (Algeria) and the Mabrouk Project (Oman).

Mohammed Ghazi Al-Mutairi has been appointed as Country Chair by Petrofac Ltd. He holds a bachelor’s degree in chemical engineering and has more than 32 years of experience in the Kuwait oil & gas industry. He is a former Chief Executive Officer of Kuwait National Petroleum Company (KNPC) and has served as the Chairman of the Gulf Downstream Association.

Recently, the company has appointed Francesca Di Carlo as an independent Non-executive Director. She has a background in Audit and Corporate Finance with core strengths in strategy and transformative organisational change.

Earlier this year, a former employee of Petrofac admitted offences contrary to the UK Bribery Act 2010. Some Petrofac individuals, both former and currently associated with the company, and entities are alleged to have acted together with this individual.

The group had issued warning to investors of increased risks to its near future after one of its former employees was found guilty (bribery). The group stated that due to the evidence found in the investigation by the Serious Fraud Office, there is a potential risk of downside in share price movement. Other risks could be a prosecution, fines, penalties or other consequences such as reputation loss.

According to this strategic alliance, the companies will work in synchronisation to facilitate gas to wire technology for the renovation and revival of marginal gas fields, helping UK clients to optimise returns.

MFDevCo will focus on finding projects that will be developed and delivered using its gas-to-wire approach, well supported by technology, feasibility study provided by Petrofac Limited (Engineering and Production services).

This approach focuses on the maximum utilisation of stalled gas resources by using them for power generation for offshores.

The turbines installed on the platform can convert the gas into electricity that can then be transported to offshores in an efficient and more convenient manner than conventional methods. The focus is on mitigating the expenses, value creation and reducing dependency on pipeline networks.

This alliance will enable the company to be a technology provider and offer services (gas-to-wire) on projects. 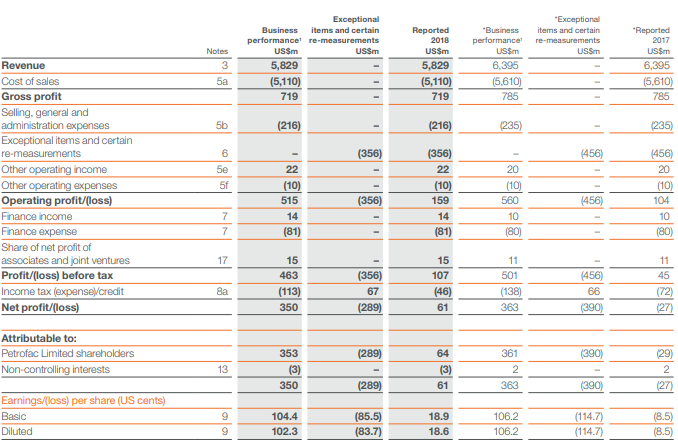 The revenue of the group from Integrated Energy Services (IES) surged by 24 per cent due to product mix, higher (average) realised prices and sale of assets.

The backlog of group plunged by 6 per cent to US$9.6 billion this year as against US$10.2 billion in FY17 due to success gained on the project portfolio (existing) and new order intake of US$5.0 billion in FY18.

In an environment filled with certain challenges, the company’s net profit attributable to the group’s shareholders stood at US$64 million. Return on capital employed stood at 26 per cent in FY2018.

The development of digital technologies was on the cards for the Board during the year. But, having witnessed disruption in other industries, they believe new technologies can change the way business is done across the sector and perhaps, more importantly, the way our clients do business.

Daily Chart as at June-25-19, before the market close (Source: Thomson Reuters)

At the time of writing (as on June 25, 2019, at 09:54 AM GMT), shares of Petrofac Limited were quoting at GBX 414.2 per share; down by 4.45 per cent against the yesterday's closing price level. The company had an outstanding market capitalisation of around £1.50 billion.

The company’s stock beta was 0.63, reflecting lower volatility as compared to the benchmark index with a dividend yield of 6.69 per cent.

The shares of the company (at the time of writing) were trading below the 60-days and 200-days SMA, which shows a negative trend in the stock price movement and could further move down from the current trading levels.

In the past 1 year, shares of Petrofac Limited have delivered a negative price return of 22.92 per cent. Also, on a year-to-date basis, the stock was down by approximately 9.12 per cent and plunged by 8.76 per cent in the past three months.