Several of these corporations have stated that they were already implementing measures for making their operations greener. However, they stressed that the governments need to come up with requisite policy measures that would facilitate them in taking these steps ahead.

On 21 September 2020, these 560 companies have collectively signed a statement for necessary actions required to this end over the next ten years. The statement signed by the companies read that resilient economies, flourishing businesses, and healthy communities depend on nature. The governments need to come up with necessary policies to overturn the loss of nature over next ten years. The companies mentioned that it is required to come together for protecting, restoring, and sustainably using the available natural resources.

The request from the corporates has preceded a summit on biodiversity that is scheduled to be hosted by the United Nations (UN) on 30 September 2020. The summit by the UN intends to build a thrust towards forming a new international deal to ward off threats to nature displayed by the recent forest fires in the Amazon and California regions. 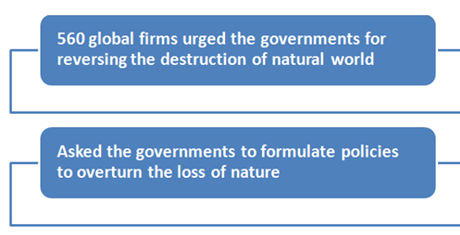 Business for Nature, the coalition that organised the statement mentioned that it was for the first time that such a large group comprising of corporate houses came together for issuing a joint call for stressing the important role that healthy ecosystems play in the well-being of humans. Business for Nature is an international coalition that has brought together influential organisations and forward-thinking businesses for required actions regarding reversing loss of nature.

In 2019, the Intergovernmental Science-Policy Platform on Biodiversity and Ecosystem Services (IPBES) said that around a million species were facing a risk of extinction. The IPBES is an independent intergovernmental body. Moreover, the World Wildlife Fund (WWF) has also emphasised that over the last 50 years, around two-thirds of the world’s animals, including mammals, amphibians, reptiles, birds, and fishes have vanished from the planet earth.

Recently the UN has come out with a report on the global biodiversity outlook that has put out some recommendations to save roughly one million species that are on the verge of extinction. These recommendations apply to the agriculture sector as well as a variety of industries across the globe. The international body has also recommended to various government for retaining around 30 per cent of earth’s total land and water areas for environmental conservation. The report suggests undertaking measures to slow down deforestation and preserve the wetlands.

Many oil companies including BP, Shell, and BHP Billiton are actively investing in climate change initiatives and are trying to reduce their carbon footprints. Let us discuss one such recent initiative by Shell.

Also read: How Are Global Crude Oil Giants Responding to the New Normal?

In a recent development, Royal Dutch Shell plc (LON: RDSA) recently announced its plans to cuts back on the fracking activities to fund the drive for renewable energy. Shell is looking for freeing up cash to deal with the coronavirus-led crisis and invest in renewable energy projects, including early-stage carbon capture and hydrogen projects. The company would reduce about 40 per cent of its overheads consisting of staff in the United States (US)-focused shale oil and gas division by early 2021. This business comprises of seven projects in the US, Canada, and Argentina, including in the core shale region of the Permian Basin at Texas.

In March 2020, the oil major had launched a £7 billion cost-saving drive across its entire business to face the challenges brought in by the coronavirus pandemic. It has been a key strategy at the company to keep the shale costs low, given the fast rates of drilling needed to maintain the output. In addition, the oil giant is looking at increasing efficiencies as it is making efforts on adapting the international push towards lower carbon sources of energy generation. Shell is planning investment in early-stage carbon capture as well as hydrogen projects. In July 2020, it announced plans regarding reducing carbon emissions to net zero. In the same month, Shell had sold its Appalachia shale assets to National Fuel and Gas Company for $541 million. The oil major planned to concentrate on core assets with higher margin. 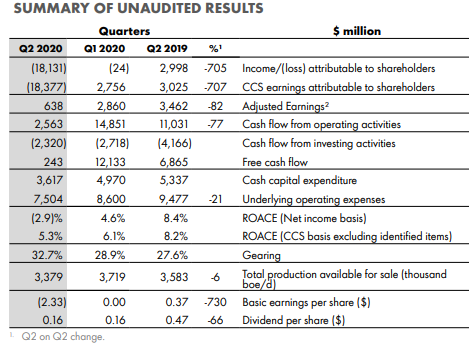 Ben van Beurden, Chief Executive Officer, Royal Dutch Shell, said that that company has delivered resilient cash flow in a challenging environment. He stated that it would keep its focus on safe and reliable operations. The measures for cash preservation would reinforce the strengthening of the company’s balance sheet.

Due to the coronavirus pandemic, the reduction in demand resulted in lower liquified natural gas (LNG) and gas-to-liquids revenues, mainly because of the lower realised prices. The well write-offs and delayed tax charges brought a negative impact of $0.6 billion on the company’s adjusted earnings.