US Market News: The major indices of Wall Street traded on a mixed note amid concerns around U.S. fiscal and monetary policy. Among the gaining stocks, Gannett (GCI) shares grew by around 2.17% amid reports that the Company would seek to refinance USD 550 million through senior secured debt. Tesla (TSLA) shares went up by around 1.80% after the Company rolled out software stating that the access would be permitted to the Tesla drivers who get a sufficiently high safety score. Toyota Motor Corp (TM) shares rose by around 1.35% after the Company had completed a 25.8 million share buyback programme.  Among the declining stocks, Alphabet (GOOGL) shares fell by around 0.47% after the Google unit would cut down the commission charged on the third-party software sales.

Rolls Royce Holdings shares surged by about 10.43% after the Company received a contract to provide the powerplant for the B-52 Stratofortress under the Commercial Engine Replacement Program (CERP).

United Utilities Group shares dropped by around 1.26% after it mentioned in a trading update that the higher first-half revenue and targeted efficiencies got offset by higher underlying operating costs.

Kerry Group had completed the sale of its Consumer Foods' Meats and Meals business to Pilgrim's Pride for approximately 819 million euros. Meanwhile, the shares rose by around 0.19%.

IWG shares went up by around 5.04% amid the media reports that the Company would consider a multibillion-pound breakup that would involve splitting into several distinct companies. 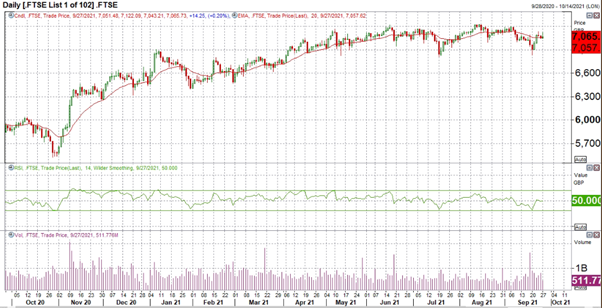