Shield Therapeutics Plc (STX) is a Gateshead, the United Kingdom based pharmaceuticals and Biotechnology company that is engaged in the research, development as well as commercialisation of late-phase pharmaceuticals which are hospital focused. The company’s flagship product is Ferric Maltol, which has been approved by the Food and Drug Administration (FDA) of the United States of America and will be sold in the US as Accrufer®. Ferric Maltol is additionally approved by the EMA and Swiss Medic and promoted in the European Union as Feraccru® by the company’s business accomplice, Norgine BV. Ferric Maltol offers various significant focal points contrasted with the present standard of care for lack of iron. The US is the world's biggest and most appealingly repaid pharmaceutical market. There are between 8 million and 9 million patients in the USA who experience the ill effects of iron inadequacy weakness, and conceivably a few times this number requires treatment for iron insufficiency. Ferric Maltol is endorsed by the FDA and is advertised in the US as Accrufer®. In Europe, it is said that there are in excess of 40 million individuals with iron insufficiency, another huge business opportunity for the company.

In September 2018, Shield went into a selective permit and commercialisation pact with Norgine for Feraccru®, covering the significant markets of Europe, just as Australia and New Zealand. The agreement saw Shield hold full responsibility for IP and assembling rights for Feraccru®, get an £11 million forthright permit instalment, up to €54.5 million of achievement instalments and sovereignties going from 25 per cent to 40 per cent of net offers of Feraccru®. The main achievement has just been accomplished by Shield and paid by Norgine. The agreement has been made for expanding the commercialisation of Feraccru® in Europe as it will use Norgine's a lot bigger set up foundation and business mastery, which means some more patients should profit by Feraccru®. Other Products in the company’s pipeline that are still under the research and development phase and not commercialised yet are PT20, PT30 and PT40. PT20 is an iron-based phosphate spread that the company is making for use in the treatment of hyperphosphatemia. The joining of adipic destructive to outline PT20 grows the phosphate confining breaking point by a factor of three, appeared differently in relation to the unmodified iron oxide. The collecting technique in like manner realises particles of an incredibly minimal size, which intensifies the surface open for phosphate official. PT20 has been solely authorized by the Medical Research Council in the United Kingdom. PT30 is a novel intravenous (IV) iron plan, and PT40 is in the advancement stage and is set to be the principal conventional rendition of iron sucrose. 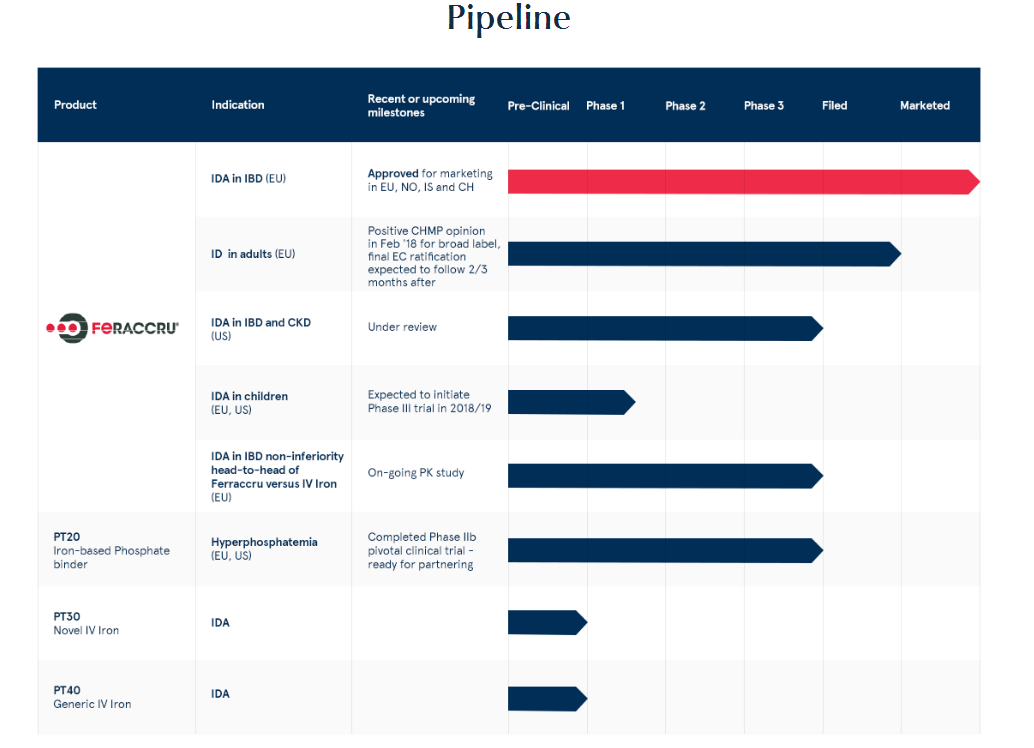 On 7th August 2019, the company made a press release to announce its half-year results for the six months ended 30th June 2019. The revenue for the period was highlighted to be at £2.61 million in H1 2019, an increase of 428.28 per cent year on year from the revenue reported in H1 2018 at £495,000. The company reported the cost of sales to be at £0.3 million during the period, an increase of 200 per cent year on year as compared to the cost incurred during the same period in the previous year at £0.1 million. Finished goods that were supplied to Norgine made up a significant portion of the costs, followed by a 5 per cent royalty payable on Norgine’s net sales to Vitra Limited, which is the original owner of the Patent on Feraccru®. Research and development costs charged to the income statement needs to be considered in aggregation with capitalised development costs.  In H1 2019, £1.3 million worth of development costs have been charged to the income statement, which was reported to be £2.1 million in the first half of previous year and an additional £1.2 million has been capitalised, which was reported to be around £2.7 million in H1 2018. The £1.3 million charged in 2019 has been lessened by the write-back of £0.2 million into the stock of lots delivered in earlier periods for assembling approval purposes, the expense of which was discounted at the time it was brought about as advancement consumption. These lots are currently open for a commercial business deal and will be charged to cost of offers as caused. The fundamental improvement cost of £1.5 million basically contained £0.7 million worker and contractual worker costs, £0.6 million on the side of the US NDA process, with the equalisation spent on the production of clinical examinations and readiness of the definition required for the arranged pediatric investigation. The £1.2 million of incurred development expenses included £1.0 million in regard of the AEGIS-H2H study and £0.2 million, an increase from H1 2018 figure of £0.1 million, for creating and improving the organization's IP assurance. The company reported a cash balance of £6.6 million as on 30th June 2019. 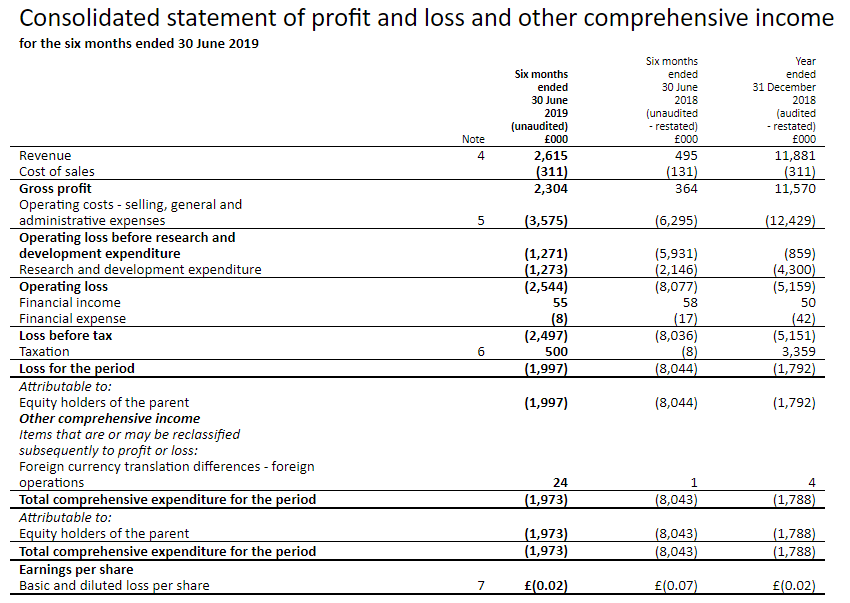 On 22nd October 2019, the company made a press release regarding Positive Results for Feraccru®/Accrufer™ (Ferric Maltol) in AEGIS-H2H phase 3b non-inferiority study at the 27th United European Gastroenterology Week (UEG) Week 2019. The following were the key discoveries made in the study: Reaction rate at 12 weeks was 74 per cent for oral Feraccru®/Accrufer™ and 83 per cent for IV ferric carboxymaltose. The 9 per cent contrast was well inside the pre-indicated non-inadequacy edge of 20 per cent (p=0.017). A repeat of lack of iron anaemia happened on any occasion once in approximately 39 per cent of the patients in the intravenous arm of the examination post the provision of basic treatment with intravenous ferric carboxymaltose. Feraccru®/Accrufer™ was the one drug that was usually tolerated nicely for the one year of treatment and recovery with a side effect profile which was reported to be consistent to that observed in previous studies that had a placebo control.

The beta of the Shield Therapeutics Plc’s share has been reported to be at 2.9417. This implies that the movement in the company’s share price is significantly more volatile in nature, as compared to the movement of the benchmark market index.