Recycling Technologies IPO: When can you buy shares on AIM?

The green tech company aims to raise around £40 million from its initial public offering (IPO).

The company hopes to gain admission into AIM in December. It plans to use the proceeds from the IPO to help in the mass production and sale of its key product offering, the RT7000.

The RT7000 is a machine that helps process plastic waste into synthetic oil. The synthetic oil is then sold back to the oil and gas industry, which is then used to manufacture new plastic.

The RT7000 machine significantly cuts down on emissions, producing about 33 per cent of CO2 emissions, compared to the CO2 produced in processing energy from waste for 1 tonne of processed plastic.

The company has so far managed to fund its unique technology through UK based crowdfunding investment platform Crowdcube and via private placements.

It is currently backed by Finland based oil refining and marketing company Neste and sustainable investment management group Mirova. 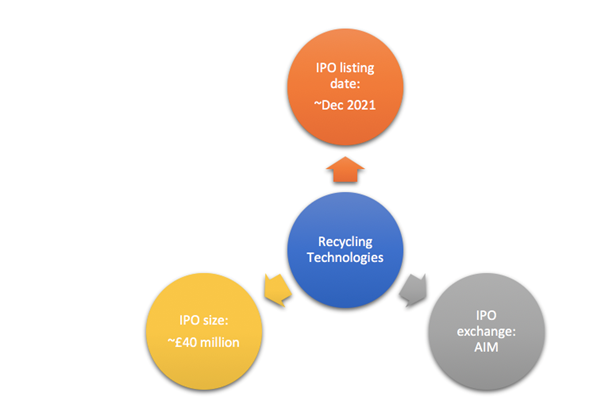 The company stated it has already lined up consumer goods majors Mars, Nestlé and Unilever as its commercial partners for the plastic to energy technology.

Recycling Technologies expects to have its first commercial-scale RT7000 machine operational one year after its IPO. This commercial-grade machine is expected to be set up in Binn Eco Park in Glenfarg, Scotland.

The green tech firm also said it has a strong pipeline of subsequent projects and customers, in addition to its first project.

The LSE has seen an increase in IPO activity this year, especially in the tech space, driven by increased tech adoption during the pandemic.

The company’s IPO intention comes amidst the ongoing COP 26 conference, where sustainability and transitioning to a low carbon economy is a major focus.

According to industry body Plastics Europe, about 368 million tonnes of plastic was produced across the world in 2019.

This figure is expected to surge to around 1 billion tonnes by 2050, according to a report by consulting group McKinsey.

Currently, just about 12 per cent of plastic waste is recycled per annum, while the rest of the 88 per cent is disposed of via being buried in landfills, burned, or by some other methods.

Thus, identifying ways to dispose of and/or effectively utilise plastic waste has risen in importance, especially as the world looks to shift towards a circular economy.

The group CEO of Recycling Technologies, Adrian Griffiths, said that plastic is generally considered a lower carbon option compared to other materials for different types of applications.