Argo Blockchain IPO: What do we know about ARBK’s Nasdaq listing?

Argo had announced the pricing of its NASDAQ listing on Wednesday, setting a price of US$ 15 per American Depositary Shares (ADS). The offering is likely to close on 27 September, subject to required closing conditions. Argo is listed under the ticker symbol ARBK on NASDAQ.

Its an uplisting for Argo Blockchain as it was already available for the US investors, trading on the OTC for some time (OTCMKTS: ARBKF).

The company had filed for a NASDAQ listing on 19 August and had set its terms on 14 September. 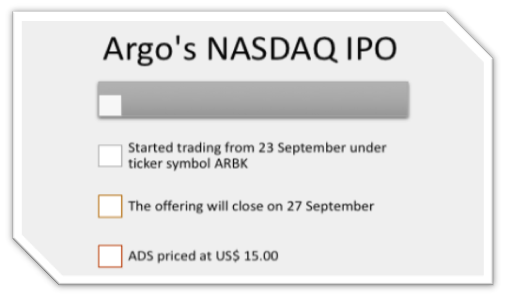 Argo was earlier expecting an IPO price range of US 18.40, which would have valued the deal at around US$ 138 million. The listing price range implied Argo would have had a market value of US$ 855 million.

Investment banks Jefferies and Barclays are the joint lead book-runners for the IPO.

The company’s general administrative expenses as a percentage of total revenue fell to 3.7 per cent in H1 2021, compared to 9.7 per cent in the previous year, while its efficiency rate rose to 17.7x in H1 2021, from 5.7x in the year before.

Argo is a leading crypto miner and has a fleet of 21,000 machines operating in North America. The company is focused on mining using renewable energy and efficient mining infrastructure to drive growth.

As the digital assets and cryptocurrency space have risen in prominence and market cap in recent times, there is no denying that it is increasingly becoming a major market for investors.

However, the environmental impact of crypto mining and new regulations had caused the market to crash earlier this year.

Notably, with Argo’s commitment to low carbon emissions and efficiency focus, it stands to gain from the recent shift towards sustainability.