I3 Energy Plc on The Verge of Transformation

I3 Energy Plc (LON: I3E), is a Westhill, United Kingdom-headquartered, independent oil and gas exploration and development company with assets and operations in the United Kingdom. The company seeks to identify and acquire high quality, low-risk appraisal, development and production of Oil & gas assets. The group aims to be the leading North Sea domiciled Oil and gas production and exploration company with an international reach. The company is currently working towards bringing the Greater Liberator licence area into production in accordance with its Field Development Plan, with a focus on the development of discoveries located close to its existing infrastructure and the exploitation of producing fields, whilst maintaining limited exploration exposure.

The company has two principal assets, the Liberator prospect and the Serenity prospect. Both of these prospects have shown promising seismic data, with significant oil and gas reserves. The Serenity prospect is potentially a very large resource, which can transform the fortunes of the company. The company's primary prospect area, the Greater Liberator Area, is located in Blocks 13/23d and 13/23c, to which the company’s independent reserves auditor attributes 11 MMBO (million barrels of oil) of 2P Reserves, 22 MMBO (million barrels of oil)  of 2C Contingent Resources and 47 MMBO (million barrels of oil) of mid-case Prospective Resources. The Greater Liberator Area consists of the Liberator oil field discovered by well 13/23d-8 and the Liberator West extension, this along with the Company's Serenity Discovery located in the northern half of Block 13/23c and for which it carries a STOIIP (stock tank original oil-in-place) of 197 million barrels of oil in place before the commencement of production, are owned and operated by the company on a 100 per cent working interest basis, moreover, the company’s drilling exercise undertaken in 2019 estimates that the Serenity prospect could hold as much as 600 million barrels in oil STOIIP, increasing the resources size of the company by three times its original estimate for the Greater Liberator Area. The company is currently working to secure funding for the completion of its drilling programme so that early advantages of production from these wells can be achieved.

The company on 2 January 2020, came out with an update on the farm-out process that it is initiating for both of its prospects, its plans for the year 2020, and the warrants issued to GE UK in exchange of the services received from them.

As on 30 November 2019, the below were the major shareholders of the company, 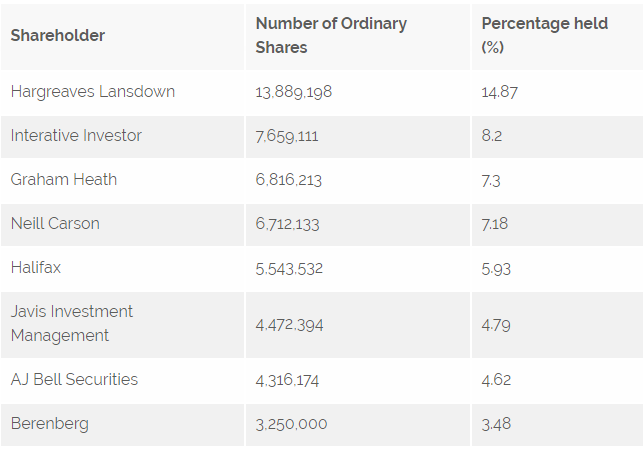 Other than Neil Carson and Graham Heath, all other seven entities in the above list are institutional shareholders, holding a total of 41.80 per cent of the company’s shares, providing it with significant stability.

The company’s discoveries in the Serenity prospect are significant and enhances the company’s valuations by several notches. The current fund-raising programme is focusing more on the equity route and less on debt route, in fact, the company has started to retire whatever debt it is having on its books in the year  gone by, accentuating the fact that it is nearing the value realisation phase for its prospects.

Banking on the high realisable value of its prospects, the company has now been able to enter into an agreement with its drill rig operator to defer some of its payments so that it can get an extra headroom to raise more capital to continue and successfully complete its drilling operations.

The company is aiming to raise funds for its current stage of activity. The company has also been careful to be debt-free at this stage, so that it may use this facility for expansion of business and acquisition of more exploration assets when it starts to rake in revenues. The likely time for the company to start production is the second half of 2020 or the first half of 2021.