DS Smith PLC (SMDS) is a specialist in plastic packaging worldwide and is a leading provider of corrugated packaging, with operations in more than 37 countries, which operates as a unified company with divisions in the paper, plastics, packaging and recycling. The company is also regarded as the industry benchmark in Supply Cycle strategy and packaging. The company has a recycling business that collects corrugated cardboard and used paper, from which corrugated packaging materials are manufactured in the company's manufacturing facilities. The packaging business is differentiated in six segments, namely UK, Western Europe, DCH & Northern Europe, Central Europe & Italy, North America, and Plastics. 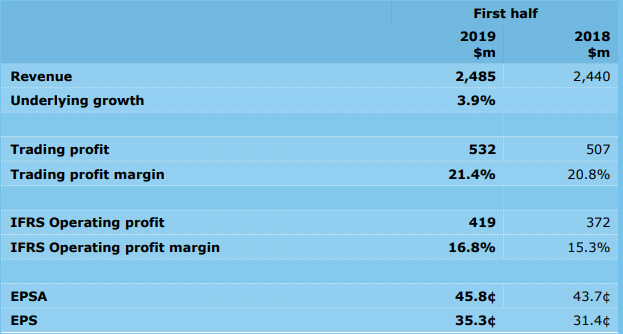 In the first half of 2019,Â the reported revenue increased by 1.8% to $2,485 millionÂ as compared with the corresponding period of the last year, due to the growth in foreign exchange and benefit from the acquisition, whileÂ on an underlying basis, revenue surged by 3.9%.Â Operating profit increased to $419 million against the $372 million in H1 FY18. In the first half of 2019, the ongoing APEX (Accelerating Performance and Execution) programme incurred restructuring costs of $48 million, with incremental benefits as compared with the corresponding period of the last year. Adjusted earnings per share (EPSA) rose by 5% to 45.8 cents against the 43.7 cents in H1 FY18.Â Basic earnings per share stood at 35.3 cents,Â an increase from the previous year same period data. Cash generated from operations increased to $543 million andÂ trading cash flow increased to $405 million. The trading profit to cash conversion ratio stood at 76%Â and remained flat against the same period in 2018.Â The net interest charge stood at $25 million with $2 millionÂ from the implementation of IFRS 16 Leases.

Taylor Wimpey PLC (TW) is a Wycombe, United Kingdom-headquartered leading residential housing developer in the United Kingdom with a small operation in Spain as well. The group operates at a regional level from 24 local offices across the country, and builds a wide range of high-quality properties, with a broad price range. The operations of the group are differentiated in four geographical segments, namely North, Central & South West, London & South East, and Spain.

WPP PLC (WPP) is a British holding company which is a world leader in communications services and comprises of companies in a range of disciplines, with world-leading position in communications, experience, commerce and technology. The group is listed on the London Stock Exchange and the New York Stock Exchange and is a constituent of FTSE 100 index. The operations of the company are organised into four reportable segments, namely Public Relations & Public Affairs, Advertising and Media Investment Management, Data Investment Management, and Brand Consulting, Health & Wellness and Specialist Communications.

To all shareholders on the register at the close of business on 4 October 2019, an interim dividend of 22.7p per share will be paid on 4 November 2019, keeping in line with the payout ratio of 66% recorded last year.