The Slump In The UK’s Retail Sector And Its Two Latest Victims: Beales and Mothercare Plc

The slump in the United Kingdom’s retail sector

2019 was one of the worst years for the retail industry in the United Kingdom in the last 24 years, with a number of stores and companies being closed down during the year. Even the companies that survived, performed poorly in the passing year. The Office of National Statistics reported a decline of 0.6 per cent in sales in the month of November, as compared to the month of October. This slump continued in December as well, as the companies did not have any respite even during the festive period. Industry experts have suggested that this was primarily due to the consumers’ deteriorating in confidence, which was driven by the uncertainties around Brexit, a snap election that took place on 12th December 2019 as well as doubts around the Budget that will be presented in the month of March for the first time by the current government. The closedown during the year included the likes of Carpetright, which closed 92 stores in UK, Toys R’ Us, which went into administration, Homebase, which closed 42 DIY stores, Marks & Spencer, which has revealed its plans to close 100 stores by 2022, (has also been downgraded from FTSE 100 to FTSE 250 for the first time in its history), amongst many more.

The slump in the sector continues to claim more victims every day, with latest being Beales and Mothercare Plc, let us discuss these two specific companies in detail.

An overview of JE Beale Plc

Established in the year 1881, Beales is one of United Kingdom’s largest retail store chains, that started out as a store that sold products of Chinese and Japanese design but gradually became a multi-product retail chain. Today, the company has products in the spaces such as Furniture and other Home Products, Men’s, Women’s as well as Kids fashion, Toys, Beauty as well as Luggage. The company partners with various brands, some of them highly sought after, selling their products through its stores. Some of these brands include Estee Lauder, Dunhill, Disney Cars, Bosch, Barbie, Jimmy Choo, Lego, Morphy Richards, Phillips, Panasonic and VR Games, etc. The company sells its products through both its stores as well as through its online platforms such as the company’s website and mobile application.

Beales Stores on the verge of Closing Down

On 12th January 2020, various news sources reported that the company was on the verge of going into administration and its stores being closed, which will put approximately 1000 jobs at risk in the United Kingdom. The company reported that it is currently under negotiation with all the landlords of its store locations for possible rent cuts, which could potentially ease out the current financing problems of the company. One of the big 4 accountant and advisory firm, KPMG, was brought in to conduct a review and present potential strategic and financing options for the company last month. The sale of the company and all its subsidiaries was one of the options that were suggested by the KPMG. This has also come after a management buyout being completed in the month of October, led by the CEO of the company.

A major issue for the company in the last couple of years has been to meet its debt obligations worth 15.8 million. This has been a serious problem because the company has operated poorly, especially in terms of its financial performance, as it reported a pre-tax loss of £1.5 million in the year ended March 2018, which more than doubled for the year ended March 2019 at £3.2 million.

A major factor that has contributed to this recent slump in the high street retail sector, has been the current business rates, as stated by different executives of these companies. The government has previously stated that in the last leg ahead of the budget announcement in March, they will conduct a fundamental review of the retail space, especially the business rates in the sector, which can help in reviving the sector.

Mothercare Plc (LON: MTC) is a leading retail company, based out of the United Kingdom, having operations all across the world. The company’s primary activities include selling parents and babies centred products, designed primarily for ‘to be mothers’, new-born, and other children up to the age of eight. The company’s product offerings span across areas like clothing and footwear for both parents and new-born kids, Home products such as soft furnishing, bath furnishing, feeding products specifically designed to meet the needs of infants and younger children as well as pushchair systems and toys segment (a segment which has now been sold to The entertainer).

On 13th January 2020, various news sources reported the closing down of all 79 stores of Mothercare Plc operating in the United Kingdom, in another major setback to the retail sector in the country. The closure will be completed by the end of 19th January 2019, and a closeout sale of the left-over stock is being conducted in all the stores of the company. The company has also put down sales from its online ecommerce website on closure already. The company has reported that approximately 2500 jobs will be lost post the store close down by the end of 19 January. This came as a part of the retail sector’s struggle as a whole, when the company had to slash down the prices of its products significantly, in the Month of December, just prior to Christmas, in hopes of competing with the online brands.

Even though the company is closing down its own stores, some products of the company’s brand, in pharmacy, health and beauty segment would still be available in other stores, securing the future of the company for the next five years, in an exclusive deal with Boots (a health, beauty and pharmacy chain). 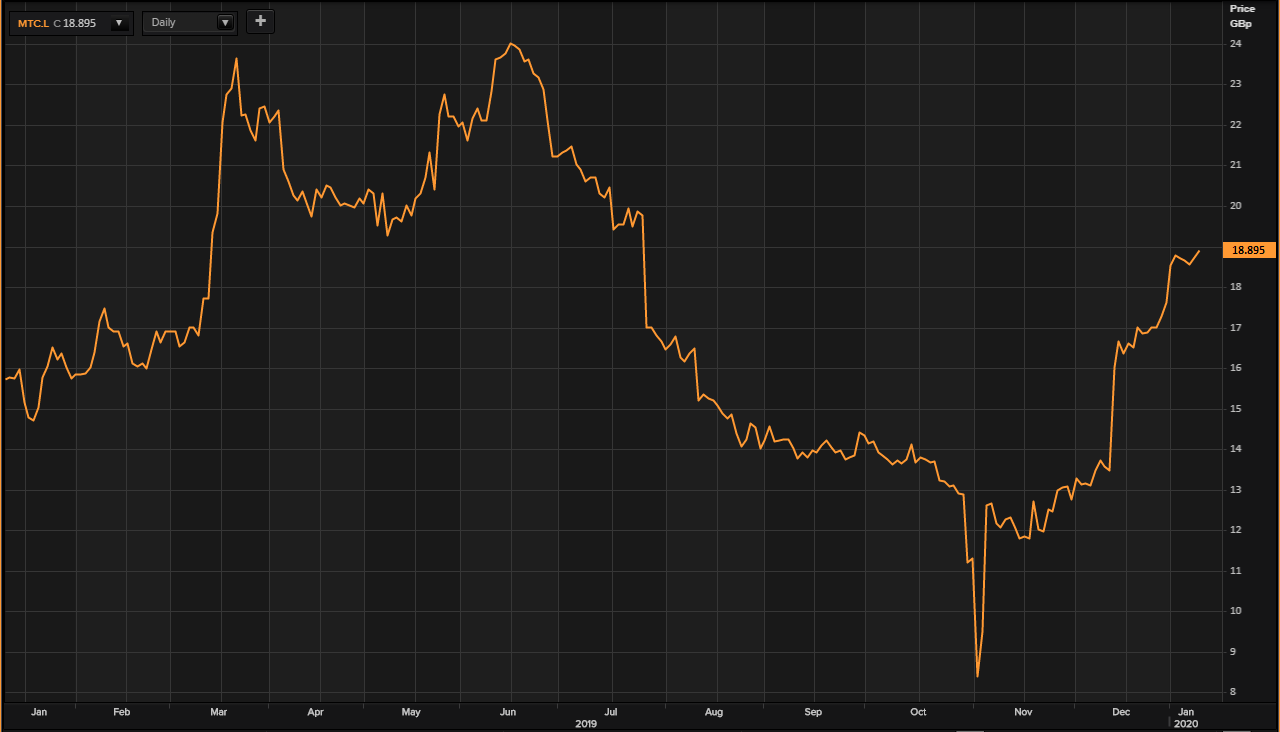 (Source: Thomson Reuters) Daily Chart as on 13-January-20, prior to the closing of the London Stock Exchange

The company’s stock has shown a positive change of approximately 21.32 per cent, in the previous twelve months, from the price of GBX 15.575 that the stock hit on January 14, 2019. The Mothercare Plc share has also displayed a downward change in the last six months of the year, of around 6.92 per cent from the share price of GBX 20.30 that it set on July 12, 2019. The company’s stock depicted a positive change of around 18.09 per cent, within the previous month from the stock price of GBX 16.00 per share that the stock hit when the markets closed on December 13, 2019.

The beta of the share of the company has been reported to be at 1.55. From this, we can infer that the movement in the value of Mothercare Plc share, is more fickle as against the movement of the benchmark index in the last twelve months.