Impact Of The Coronavirus Outbreak on The Global Economy

Recently, the World Economic Forum (WEF) had issued a report regarding the economic effects of the COVID-19 coronavirus around the world. The global organisation pointed out a number of areas that would be impacted by the outbreak, such as global oil prices and commerce, along with an already estimated slump in the growth of the Chinese economy. This slump in itself could be a huge factor for another slowdown in the global economy as well, as Chinese businesses and companies have significant trade relations with other countries.

We can further elaborate on the issue with the help of the Chinese GDP growth chart below. This chart shows the Chinese Annual GDP growth over the years from the year 2000 (represented by the joint line with markers). This depicts how Chinese GDP growth has responded to some of the global events such as the SARS Outbreak in the year 2003 and 2004, where the GDP growth of China remained flatlined amidst a period of growth. Even during the phase of US Mortgage and Global Financial Crisis in 2007 and 2009, Chinese GDP growth fell steeply from 14.23 per cent in 2007 to 9.39 per cent in 2009, starting a period of a prolonged slowdown, and the fact is that the economy has never recovered back to its peak of 2007 growth rate till today.

The further slowdown was induced with the onset of US-China Trade war in late 2016 and early 2017. The Chinese economy could have been back on track, as at the beginning of the current year, the phase one of the trade agreement between US and China had been agreed but, with the Coronavirus outbreak, things have slipped further, and this could have a huge impact on the world. The trendline (dotted line), represents the average movement of China’s GDP, and on the basis of this, there has been an estimation that the Chinese GDP growth will fall down even further in 2019 as well as 2020, on the back of the Coronavirus Outbreak.

A fall in demand for oil

As per an oil market report by the International Energy Agency (IEA) for the month of February 2020, Global oil demand has suffered significantly because of the Covid-19 (novel coronavirus) virus outbreak from the city of Wuhan, in China and has also caused a major shutdown of Chinese businesses and manufacturing facilities of some of the world’s biggest companies in China. As per the chart below, in 2018, China made up for a 13.74 per cent of the world’s total oil demand (as per the data from the US Energy Information Administration). The demand for oil has now been estimated by the IEA to fall by approximately 435,000 barrels per day year on year by the end of the first quarter of 2020. This has also been reported to be the biggest quarterly downfall in approximately a decade. Due to the weakened demand from Chinese businesses, which make up for large part of the total global demand, the IEA has reduced its growth forecast by around 365,000 barrels per day to 825,000 barrels per day, the lowest estimate presented by the IEA since 2011. 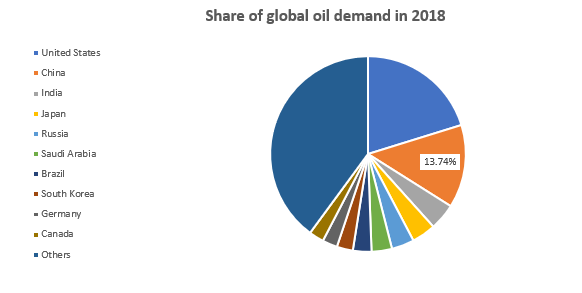 In the second week of February, along with the tragic loss to lives in the country of China and other parts of the world, as well as the impact on the lives of the people who had been impacted, media sources and analysts started covering and estimating the outbreaks impact on the global economic of this epidemic.

As per expert economic forecasters, this epidemic could potentially cost the global economy more than US $1 trillion in lost output if it spreads and turns into a global epidemic, affecting multiple countries on a large scale, such as the SARS epidemic in 2002 and 2003. Various economists working in the world-renowned Oxford University’s Economics department have cautioned that this outbreak of the Covid-19 virus to countries, that are outside of Asia but have trade relations with China, will lose out on an estimated growth of around 1.3 per cent by the end of this year if the situation persists. This figure would mean a loss of around US $1.1 trillion in lost productivity in absolute currency terms. Experts and the economists have also stated that their global economic model has also depicted that the virus has already started affecting productivity, as closures of manufacturing facilities of some of the biggest global companies in China have also now moved over to some of the neighbouring countries on the Southern border of country, such as Taiwan and Thailand, and these companies are now facing huge issues in terms of the procurement not only raw materials but the finished goods from these regions. The logistical and supply chain space across the world has suffered severely as well, due to travel advisories being issued from governments all over the world, which is leading to flights to and from China and some of the other regions being cancelled.

Earlier, after the first week of Feb, when the news of Covid-19 being a global epidemic first spread, the global ratings and analytics firm Standard and Poor’s (S&P) cut down its estimates for the economic growth of China for the current year by around 0.75 percentage points. The rating agency mentioned that the coronavirus would have a temporary but huge impact on the Chinese economy, that could eventually impact the economy of the whole world, which just had started seeing some signs of recovery after the Brexit got completed and phase one of the trade deal between US and China was agreed. The rating firm commented that it now believes that the Chinese GDP growth rate will be at a meagre 5 per cent in FY 2020, a reduction, as compared to the previous estimate of 5.7 per cent. The rating agency also mentioned that it was very certain in its figures, because of the risk estimates not being accurate due to the continuous spread and uncertainty around the actual impact from the outbreak.

In terms of global companies, Apple has become the first one to slash its quarterly revenue forecasts due to the virus spread, from US $63-US $67 billion to US $48 to US $52 billion in Q1 2020. This, as per the company, has been due to the shortages in iPhone supply during the period, as most of its manufacturing facilities in China have halted production, and some of the retail stores near the Wuhan region, which is the origination of Covid-19, have been closed out. Even in the other stores, the sales of iPhones, especially during the period has been lower as compared to the company’s previous estimates, due to people not moving out and shopping.

It is expected that many other firms and battery companies will also announce such a reduction in their revenue and weak overall financials due to the impact of the coronavirus outbreak.