According to the IMF’s (International Monetary Fund) latest global financial stability update, released on June 25, the heaps of corporate debt piling up globally can easily trigger business meltdowns across nations. These deadly loans might lead to a flood of company insolvencies, further delaying any expected global economic recovery. The situation is equally grim for the household debt burden across geographies. The economic scenario is quite similar in advanced and emerging countries, depicting poor chances of revival, the update added.

Banks are already aware of the grim situation, and have begun with provisions for higher losses on their corporate and household loan segments.

Further, the S&P Global Ratings agency lamented that the credit parameters were already weak before corona pandemic struck the world. With strict social distancing measures in place, industries will continue to suffer lower incomes and higher cost for months to come.

IMF has forecasted that the sum total of global output loss from the Covid-crisis for the years 2020 and 2021 will be USD 12 trillion. It also predicted that the world gross debt/GDP ratio will be 101.5 percent in 2020, as compared to a much lower level of 82.8 percent recorded in the year 2019.

The global fund is extremely worried about the apparent disconnect between equity markets and the ground level situation regarding the real prospects of any improvement in the global economic output. With equity markets already on an upswing, they seem to be confident that financial support from banks will surely bring back the derailed global economy on the growth path very soon. But the downturn might be deeper than expected.

Resilience levels of the major lending banks around the world will soon be put to test with mounting debts and credit losses resulting from a large number of insolvencies.

Financial stress might also get further challenged if a second wave of infections arises in some parts of the world, despite the containment measures in place. 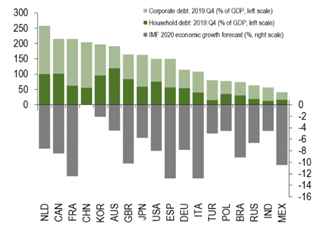 Corporate and household debts were already very high at the end of Q4, 2019, which are rising further due to the Covid led economic recessions being experienced across most nations in the world. IMF’s economic growth forecast for the year 2020 is seen as negative for all the nations shown in the chart, except China, as depicted on the right scale of the above chart. Both the corporate and household debt levels are also at alarmingly high level in the selected nations, including the UK (shown with the symbol GBR).

The corona crisis has led nations to borrow billions and trillions of dollars, and burden their respective government exchequers. But repaying these loans is going to be an equally daunting task, and nations should be planning for the same, well in advance.

Lord Mervyn King, Former Governor, Bank of England has warned that the ongoing defaults in Britain could trigger yet another financial crisis for the country’s economy, and one needs to be careful of the same. He has called the prevalent high UK financial debt as the ‘Covid debt timebomb’. He remarked that the size of bank loans have reached a very high level, and can easily trigger a downfall, which may rule out any economic recovery in the near future. King argued that such high debt levels might need to be backed by even higher levels of subsequent debts, if not paid back fast.

Britain is not unique in following this new trend of sitting on a debt timebomb and many other nations including US and the EU are following suit, given the state of their struggling businesses and sagging demand across a very broad base of goods and services. The total debt in Britain has already crossed the size of its national economy by the end of May 2020, reaching close to 2 trillion pounds.

It should not come as a surprise that Bank of England is very worried about the repayment of debt taken by many large companies. The central bank is now mulling over promoting equity finance instead of giving additional loans, to support struggling businesses. An equity finance might aid speedier recovery and lower medium-term risks.

Let us now take a closer look at Tata Steel, one of the top companies in the UK Steel sector, undergoing financial stress.

Reports claim that Tata Steel is seeking a government bailout worth 500 million pounds, and is in talks with the UK Treasury officials regarding the same. It wants this bailout in the form of a commercial loan, which would be paid back once the demand for steel starts to recover.

This state loan is expected to be one of the first major transactions under ‘Project Birch’, a government scheme to protect strategically important businesses of Britain. Tata Steel owns Britain’s biggest steel producing units, located at Port Talbot in Wales. The company employs more than 8000 people across Britain and will also be signing up a separate rescue deal with the UK Government to protect the jobs of its employees.

In sum, the financial conditions have eased in general across the world with national banks coming forward to extend large chunks of loans to households and companies. However, with no hopes of any sharp pick up in demand across good and services in the near future, the supposed economic recovery might be delayed further, as the high debt levels might trigger yet another global financial crisis. Even the UK economy seems to be sitting on the so-called Covid debt timebomb, and there is a need to think through and implement a proper loan recovery plan, especially because a large number of insolvencies may be just round the corner.