The RBNZ announced an increase of 25bps in its official cash rate to 0.75% in its monetary policy meeting on 24 November. The hike in rates comes to curb rising inflationary concerns.

Many economists are projecting borrowing costs to increase at least 2% by 2022 and go higher by December 2024.

On this note, let’s walk you through the performance of these 5 NZX banking stocks. 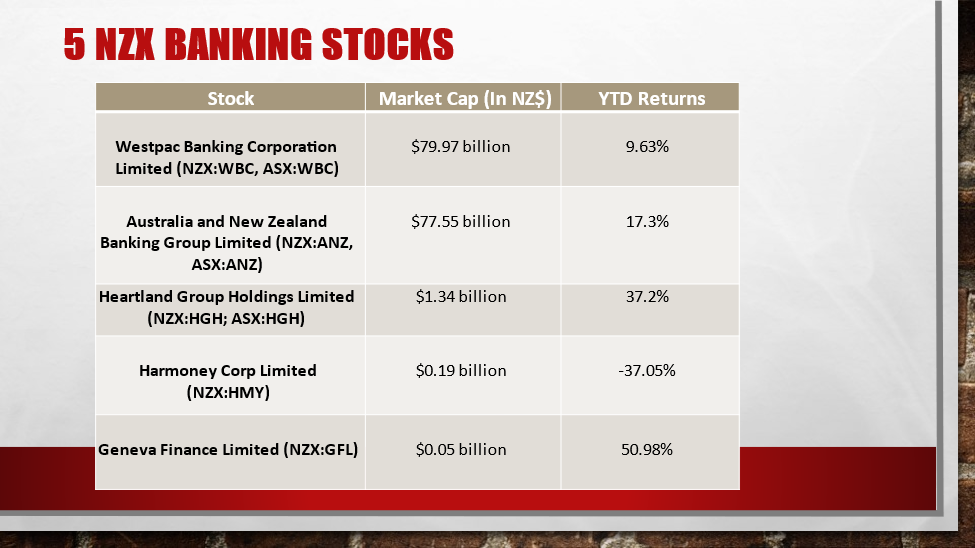 ALSO READ: Do 5 NZX penny stocks have the potential to turn into multibaggers?

The report revealed that substantial improvement was needed in WBC’s risk governance as well as underinvestment in risk management abilities.

ANZ notified on Tuesday that shareholders would be asked to give consent on the performance rights grant to be given to ANZ’s CEO Mr Shayne Elliot in the terms set in the 2021 Meeting notice.

In coming year, the Group anticipates a profit of $93 million to $96 million.

ALSO READ: How are 5 NZX retail stocks doing amid sharp rise in imports?

HMY expects a Group pro-forma revenue of at least $92 million and a loan book of nearly $600 million in FY22.

Geneva Finance has been asked by the NZ Markets Disciplinary Tribunal to pay a penalty of $65K as well as the cost of the NZX and Tribunal for not releasing its earnings guidance for FY ended 31 March 2021 promptly and without any delay.

DO READ: The buzz around the New Zealand market today

The rise in cash rate will help restrict stimulus to lessen pandemic pain and help the economy recover strongly.