Fortunes do turn around. And at times, they turn around fast. Nothing exemplifies it better than crude oil prices. A year ago, crude oil prices were at the historical lows. The prices of brent crude oil were hovering near the zero level, while the Western Texas International (WTI) was trading in the negative territory – just little over a year ago.

A year later, here we are today and crude oil prices are at their highest level in over two and a half-years. Both Brent as well as WTI are staring at US$80 a barrel mark, for the first time since October 2018. Backing then, oil prices had surged after the sanctions were looming on the crude oil exports from Iran, amid the US-Iran stand-off over the nuclear deal. 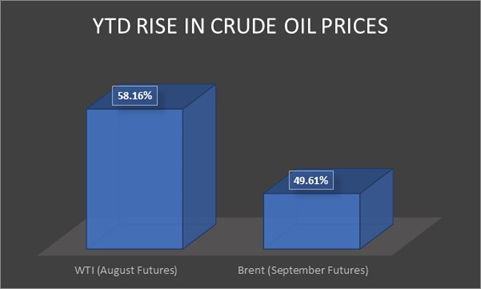 How are prices of crude oil determined?

Crude oil prices hinge on a simple equation, like any other marketplace, of supply and demand. Any kind of economic growth requires a lot of fuel to run the production activities. Therefore, growth is one of the biggest factors affecting petroleum product—and therefore crude oil demand. Growing economies increase demand for energy in general and especially for transporting goods and materials from producers to consumers. In a recovery phase, two primary uses for the crude oil are: energy for production and energy for logistics.

Right now, most of the economies across the globe are focusing on economic recovery from one of the worst recessions in the recorded world history. Crude oil prices are, therefore, on the rise, stoked by the rising demand of the fuel. To complement it, the supply cuts from 2020 by major oil producing nations have been extended till now. The Organisation of Petroleum Exporting Countries (OPEC) – a syndicate that controls an influential 40% of the global oil supply – extended supply cuts made in 2020 when crude oil prices had reached a historical low during the first five months of 2021 and countries struggled to maintain the balance of excess supply over paucity of demand due to the COVID-19 pandemic. Saudi Arabia, one of the major oil-producers across the globe, made an additional voluntary production cut of 1 million barrels per day between February and April. Of this only 250,000 barrels of production has been restored in May.

Are supply cuts continuing? But why?

OPEC Plus – a conglomerate of OPEC countries and its allies – had met over the weekend, with an aim of restoring the production cuts. OPEC Plus, as on date, consists of OPEC countries along with Azerbaijan, Bahrain, Brunei, Kazakhstan, Malaysia, Mexico, Oman, Russia, South Sudan and Sudan. Even as the meeting ended in an impasse, there has been restoration of production cuts – albeit partially. Amid the pandemic last year, as global demand of crude oil started diminishing, OPEC Plus had agreed to record output cuts of almost 10 million barrels per day (bpd). Till now, they have been gradually relaxed by 4.2 million bpd. So, the production level is still 5.8 million bpd below the pre-pandemic levels of 2019. The meeting on Monday was called off after disagreements between two of the most influential members of the cartel – Saudi Arabia and United Arab Emirates (UAE).

Will oil prices reach US$100 a barrel?

For a record, crude oil prices had crossed US$100 a barrel for the first time on 31 January 2011. The prices were sustained over the US$100 mark for over next three years till September 2014, at times, surging to as high as US$130 a barrel. There were two major reasons at that point in time, for the rising crude oil prices. First, like current days, back then, the world was coming out of The Great Recession. So, the surge in the fuel demand was leading to a surge in the crude oil prices. But that was not it. The world was witnessing the Arab Spring back then along with a civil war in Libya – involving the key countries contributing to the oil supply across the globe. There were also bottlenecks in transportation in the US Midwest. This time, however, the rising crude oil prices are just a factor of supply-demand mismatch – the differences over which can be ironed out through diplomatic avenues. So, it is unlikely that crude oil prices would cross US$100 a barrel, unless the US troop withdrawal from Afghanistan has volatile repercussions. There is also another factor that can add to the pressure on oil prices – the escalating tension between Israel and Iran. If there is any kind of conflict between the two middle eastern countries, crude oil prices may inch towards the US$100 mark – even if it doesn’t cross it.