Which are the hottest names in the crypto space this year?

Cryptocurrencies have been selling like hot cakes this year. It has been one of the most talked-about asset classes, of late. From Tesla Inc (NASDAQ:TSLA) CEO Elon Musk-backed rally of the meme cryptocurrency – Dogecoin, to the controversy surrounding the environmental concerns about Bitcoin mining – there hasn’t been a single week this year when an update related to cryptocurrency hasn’t hit headlines.

And that is not it. The volatility in prices of cryptocurrency has been huge – and more worryingly, quick. This would mean that investors planning a long-term position in digital currencies would be skeptical, owing to the huge price fluctuations. Some asset managers, in private, have been comparing the fluctuations in cryptocurrency prices to the swings of a golf club.

Which are the hottest names in the crypto space this year?

While many of the cryptocurrencies would have seen all their year-to-date gains being wiped off by this time, there are some that are still holding the fort. There could be many other factors that can determine the choice of an investor. If an investor is looking for more security, he/she would opt for the higher market capitalisation – where Bitcoin is the leader, followed by Ether, XRP, Cardano and Stellar. However, if an investor is looking for stability, his or her obvious choice would be Tether – the cryptocurrency that has mostly remained flat. On the other hand, if an investor is staring at easy liquidation at the time of selling the digital asset, he/she may opt for a cryptocurrency that has high volumes – led by Ether (at the time of filing this copy), followed by Bitcoin, Bitcoin Cash, Litecoin and Chainlink.

But, in the current scenario, where global liquidity is flush, most, if not all, investors are chasing high returns. The better the returns, the better the chances of investors buying the cryptocurrency. The demand, currently, seems to be directly proportional to the return being offered by each digital asset. So, here is a list of the hottest cryptocurrencies this year: 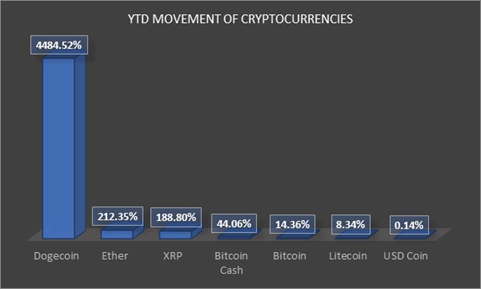