Nangka, in Malay language, means jackfruit. Four tropical cyclones have been named after the jackfruit in the northwestern Pacific Ocean. The latest Nangka storm is one of the cyclones featuring in the 2020 Pacific typhoon season. The typhoon season lasts throughout the year, but most of the cyclones usually grow between May and October.

There occurs a complete shutdown in Hong Kong when No.8 signal or above is announced. Almost all kinds of businesses shut down, and trading is abandoned for the day.

On 13 October 2020, Hong Kong Exchanges and Clearing Limited (HKEX) declared that trading activities in the securities and derivatives markets are being abandoned due to the issuance of Typhoon Signal No. 8. The organisation further stated that no securities clearing and settlement services would take place on the day.

The Hong Kong stock exchange barred trading on securities and derivatives markets after tropical storm Nangka triggered administrators to shut down all the businesses on 13 October.

The step was taken after the official Hong Kong Observatory maintained the storm signal at No.8, the third-highest on its scale in the afternoon hours. The organisation also upheld that there was a slight possibility of the signal being lowered before 4 pm. The warning also said that strong winds at a speed of 39 miles per hour and even more are anticipated.

In the afternoon, Nangka was reported to hover around 490 kilometres south-southwest of Hong Kong. It is estimated to turn west or west-northwest and travel at about 22 kilometres per hour on the way to Hainan Island and then build up slowly, the Honk Kong Observatory stated on its website. 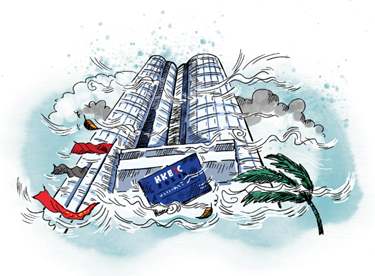 Impact on the Stock Market and Industries

In August, a typhoon of similar stature disturbed trading at the Hong Kong stock exchange. One of the strongest typhoons of 2020 hit Hong Kong, which led to the scrapping of morning trading in the securities market. Pre-market trading was cancelled, and the delay was observed in the derivatives market. Many businesses also shut down, and public transportation got disrupted.

In the year 2018, the city of Hong Kong recorded the maximum No.10 signal when the Typhoon Mangkhut had struck. Mangkhut left the roads obstructed, buildings broken and a lot of areas flooded.

Effect on Small and Large Businesses

Companies that are highly exposed to a storm have a tendency to outstrip the market for almost a week after the event. Analysts take into consideration the nature of a stock price at least ten days prior and ten days after the storm.

It is reported that in Japan, the effect has been there since 2012 over short holding periods. As a viable trading plan, industry analysts calculated the profit and loss from extracting a unit-value spread to the market of Japanese stocks with less than 50% factory exposure at the time of storm impact. Nonetheless, huge storms garnered quite devastating impetus in 2017 and 2018, and all of the reaped benefits were wiped out.

Big storms and hurricanes of various orders are covered extensively by the news that supports people to do their level best to be prepared for the likelihood of power cut, travel troubles and closure of outlets providing basic amenities for an unknown period of time.

But there are repercussions that are not visible but still exist and have a bearing on life cycles. Along with severe storms affecting small and large businesses, especially manufacturers and suppliers, there is a huge impact on the stock markets.