Vice President Mike Pence has said that he will not use his right to invoke the 25th amendment and pronounce Donald Trump ‘unfit for office’.

Mr Pence informed this via a letter to the Democrat leader Nancy Pelosi, who threatened to impeach the president if Mr Pence does not agree to invoke the 25th amendment.

Vice President explained that the Capitol Hill riots were devastating for the country and the whole world, but not a reason to remove the sitting president from the office.

He cautioned that Democratic commitment to remove Mr Trump from the White House might backfire and bring even more unrest within the nation.

After US Vice President revealed his final decision, Ms Pelosi is likely to immediately set into action the procedure for Mr Trump’s impeachment.

RELATED: Calls grow for removal of Trump via 25th amendment or impeachment

What did Mr Pence say in his letter?

Mr Pence wrote a one-page letter addressing Madam Speaker (Ms Pelosi), saying that he had no interest in playing “political games”. He added that he did not believe in ‘the course of action’ that the Democratic party demanded him and the Cabinet, adding: 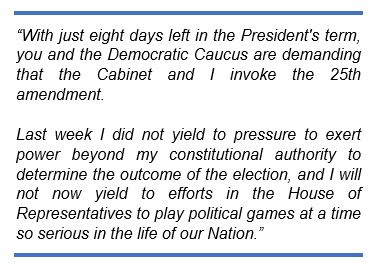 Mr Pence reminded the constitutional definition of what the 25th amendment truly is and in what circumstances Vice Presidents generally apply it.

He said the extreme measure is taken in case the sitting president is either disabled or incompetent to fulfil his duty.

The US Vice President reminded Madam Speaker of her own words when the Senate asked him to invoke the 25th amendment.

Ms Pelosi had asked Mr Pence to determine his decision on factual, medical, and scientific grounds. In the letter, Mr Pence said he did exactly what Madam Speaker asked him to do, writing:

What would discharge Mr Trump from his duty?

In order to apply the 25th amendment against Trump, a majority of the Cabinet needs to agree that it is a rightful thing to do.

However, as the acting vice president, Mr Pence has the final say on the issue, regardless of what his fellow Senators conclude.

As mentioned earlier, Ms Pelosi is highly likely to proceed with impeachment now that Mr Pence has ruled out invoking the 25th amendment.

Apart from the vast majority of Democrats who want Mr Trump gone earlier than expected, some powerful Republican politicians have also joined the chorus in support of impeachment, one of them being Liz Cheney.

Ms Cheney is the third most powerful Republican in the Congress, so her opinion might sway the fellow Republicans in favour of Trump’s impeachment. Lashing out at Trump’s action during his time at the White House, she stated:

Two-third of the whole Senate will need to agree on Mr Trump’s impeachment.

If this happens, Mr Trump will go down in history as the first ever US president to have been impeached twice.