Intel Corporation (NASDAQ: INTC) plans to build two new chip factories for US$20 billion in Columbus, Ohio. The stock gained 1% after the news. The company said the new factories will produce advanced semiconductor chips whose demand has increased.

Intel is also exploring other innovative products as part of its IDM 2.0 strategy, it said. The company will spend an additional US$100 million to help build the new semiconductor manufacturing hub in collaboration with educational institutions.

It will also help build a talent pool to support Intel’s research programs.

The construction of the factories will start later this year, while production will begin in 2025. 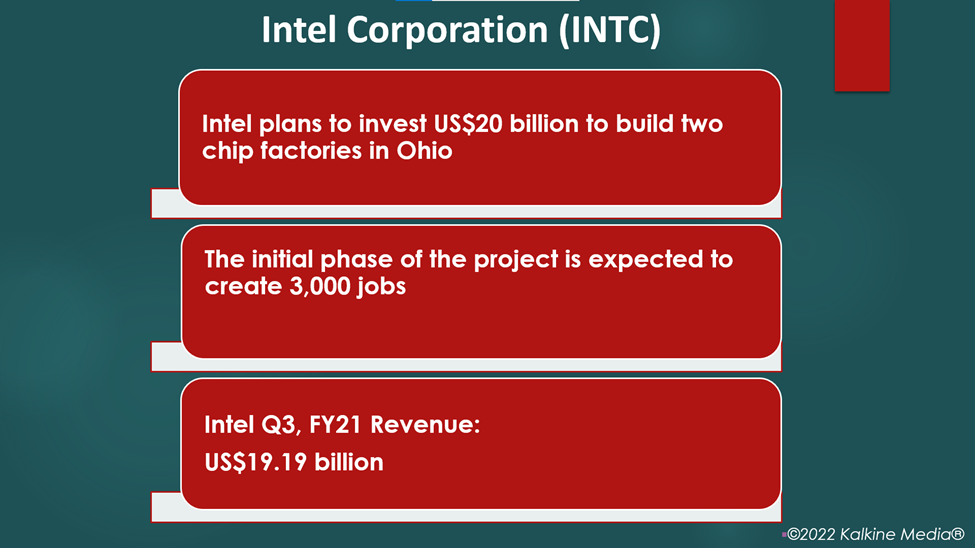 Also Read: Top 5G stocks to explore as US rolls out the service

Also Read: Pfizer covid vaccine for kids under five on the anvil

It will report its fourth-quarter results on January 26 after the market close.

Also Read: Russia to ban mining and use of cryptocurrency

The new factories are expected to create 3,000 Intel jobs initially. It will also generate around 7,000 construction jobs during the build. Intel will spend about US$100 billion at the new site over the next 10 years. Commenting on the project, Ohio Governor Mike DeWine said it is "monumental news for the state of Ohio".