Some experts argue that the share market is an economic and not a political barometer. Given interlinkages between economics and equity space, the micro and macroeconomic indicators continue to drive the American share market. However, there is no denying the fact that the market momentum is also eyeing upcoming presidential politics.

Numerous factors seem to be shaping the US share market performance at present. There have been hints of economic recovery with a surge in the sale of new homes. Efforts to enact further stimulus in Washington has kept the market optimistic.

Overall, weak macro-fundamentals cannot be ignored. While the US presidential election is merely a month away.

Weekly Recap of The US Stock Market 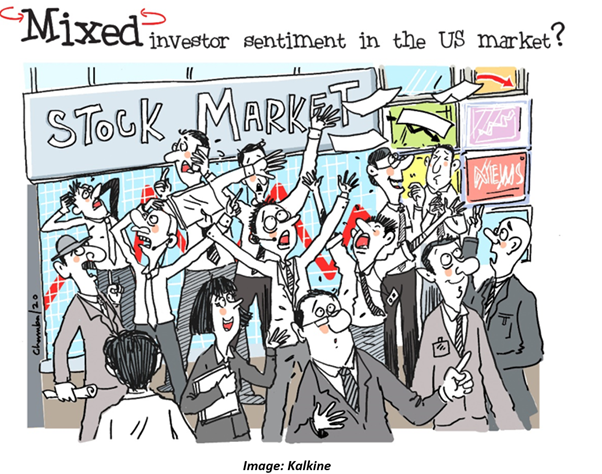 Below are some noteworthy updates from the US stock market, as it ended the week in a mixed bag-

On Friday, 25 September 2020, Wall Street ended higher as the technology rally seems to be squashing the virus fears. Constituents of FAANG stocks continue to charm investors, stealing the majority of the tech-show.

Investors are increasingly adopting long term approach and are considering technology to be an attractive recession-proof theme. Increasing number of Tech IPOs and new entrants in buoyant fintech space are exciting to watch. Occasional tech routs seem to be a healthy correction perhaps.

Most experts believe that a global economic recovery is underway after a severe contraction in the first half of 2020. At the back of strong stimulus packages, staged reopening of economies and strong R&D activities towards virus vaccine, the unprecedented crisis hour seems to be getting better.

In the US, for several months until the end of July, the US government provided a USD 600 per week supplement to unemployed Americans, offering the necessary financial support.

The property market revival is also offering flickers of hope for economic recovery as evident from the latest surge noted in the sale of new homes.

While we cannot ignore the economic downside. Though the government reported relatively strong employment numbers for August, there is a long way to go. The recent establishment survey suggested that there were 1.371 million new jobs generated in August. This was down from 1.734 million new jobs that were created in the prior month.

The unemployment rate was down from 10.2 per cent in July to 8.4 per cent in August, the lowest level since the crisis began—but far above the pre-crisis level of 3.5 per cent in February.

Besides, retail sales decelerated in August, indicating that the expiration of stimulus in July may have had negative consequences. In August, retail sales were up 0.6 per cent from July, compared to an increase of 0.9 per cent in the previous month.

It should also be noted that the value of the US dollar has fallen sharply since the start of the pandemic. A cheaper dollar indicates stronger exports, weaker import growth, higher inflation, and more inbound investment.

The virus continues to remain a threat, and till it does not subside, or a vaccine is not found, economic recovery scenario may remain dicey. For share market participants, the uncertain and bumpy recovery path ahead calls for judicious investment approach to reap the hidden benefits in the stock market.

ALSO READ: Is the US set for low-interest rates for the next 3 years? The Fed believes so

The result of the US presidential election in November may have a significant impact on the global economy, business environment, and geopolitics. So much so, it could be the biggest event of this year- after the pandemic.

Donald Trump has turned the table, advocating restrictions on trade and immigration, rejecting alliances and treaties, and concentrating on the domestic agenda. His closest competitor, Joe Biden, is known to have a globalist instance, possessing a soft corner for freer trade, migration, and cross-border investment.

ALSO READ: How is the US Election Race Faring? Does it impact your portfolio?

It will be interesting to see if the Wall Street climbs or dips after the election results are out. History proves that trading volume spikes and stocks tend to climb upon these results- as transpired when Barack Obama and Trump won.

The video has been prepared for informational purposes only and is not intended to be used as a complete source of information on any particular company. The above video is NOT a solicitation or recommendation to buy, sell or hold the stock of the company (or companies) under discussion. Kalkine does not in any way endorse or recommend individuals, products or services that may be discussed on this site.