How is climate change impacting the way NZ businesses operate?

Global Climate Change is one of the major issues of our time, which requires an immediate attention of people across the world to tackle it. Scientists were predicting about the same since long, and now the impacts are quite evident.

We can see more dramatic events in climate changes than ever before, with an untimely weather changes occurring quite frequently. The weather patterns are shifting, which impacts food production, and sea levels are rising, that increases the risk of catastrophic floods.

On home turf, primary production through forestry, farming, and fishing sectors have been highly crucial for New Zealand's economy. The increasing climate changes are adversely impacting the primary producers like - growers, farmers, foresters, and fishers, and in general, it is affecting the communities that support these producers and ultimately the country's economy.

The climate change would impact what New Zealand can harvest in the sea or on land and the amount of production will be affected as well. There will also be changes such as - some regions will become more suitable to cultivate crops and produce goods than others. Volatile weather cycles will hamper the year's productivity.

Due to steadily rising global ocean temperatures, some fish populations are also in danger. The scientists have found connections between fish quantities and changing weather patterns. The affected fish species include - scallops, red cod, hoki, snapper, and rock lobster.

What to expect in future? 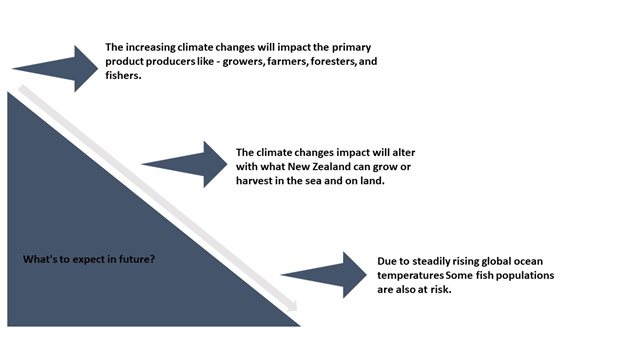 The temperature is increasing more in the North Island than the South, with the most significant warming observed in the northeast region. The changing climate is going to affect the environment, economy, and the way of life.

Winter season is anticipated be more comfortable and warmer with fewer frosts. Consequently, electricity demand will also reduce during winters. On the contrary, summer would require more electricity consumption due to increased uses of the air-conditioning systems. However, warming in New Zealand is expected to be lower compared to other parts of the world.

Intense and more regular winter rainfalls are expected in the future, which will result in river flooding and overwhelmed urban drainage systems. Summer season is expected to be longer with high temperatures and low rainfall, which will lessen groundwater supplies; hence water demand will be more during the dry and hot summers.

Methane and nitrous oxide from agriculture is more extensive than normal proportion. Due to extensive hydro-generated electricity, the country has lower than typical carbon dioxide emissions from electricity production.

Despite promises to maintain and reduce the emission, gross emissions have increased notably, mostly in the electricity (91 per cent), agricultural (12 per cent), and transport (70 per cent) sectors. Due to increased rates of deforestation, net emissions rose sharply in 2005, but have since stabilised.

The youth of the country is urging for a green recovery; they want the government to take up the issue as seriously as the coronavirus situation, which has been successfully handled by them. NZ government has also earned an international praise for curbing the virus in the first phase. The younger generation has also been pushing for job creation in green energy and conservation.

Even the political parties are committing towards taking the matter seriously. Some of the points around, which the parties in New Zealand have made tall claims include - transitioning to regenerative agriculture, protecting the oceans, transitioning to clean transport and clean energy, and dealing with plastic waste.

Why is the climate changing?

The climate is changing due to increased quantities of greenhouse gases in the environment. Greenhouse gases are vital for the existence of people and other living creatures. These gases take place naturally and make earth a livable place.

The greenhouse effect is a natural process where some of the sun's warmth does not reflect into space and makes earth warmer. However, due to over a decade of deforestation, industrialisation, and large scale agriculture, volumes of greenhouse gases in the atmosphere have increased to record levels, which was not witnessed in the last three million years.

Climate change would also bring health issues as the species of pests, and diseases, humans are vulnerable would also change. If climate change is going to continue at the same pace, the time is not far when people would also have to experience lockdowns due to drastic weather changes not seen before.

Bottom line: The alarming climate situation calls for immediate collective efforts to safeguard our future generations from this global concern. If governments and businesses do not address this issue now, adjusting to the consequences in the future will be far more complicated and expensive.