Global equity markets have been garnering everyone’s attention. After tanking into bear zone in March 2020, the markets recovered soon and have been witnessing an unprecedented rally for the past 1.5 years now despite the economy being in tatters.

Most markets have defied every sane logic of stock analysis, as they keep rallying despite the gloom in the real economy. The rally has continued into this year – at least in some of the major markets. The reason? The stimulus checks distributed by the governments across the world ended up into stock markets, as people started seeing opportunity at the bottom. Even as fundamentals haven’t improved, stock markets have continued to rally.

While the Morgan Stanley Capital International’s Emerging Markets index has corrected by 5% on a year-to-date basis, but that is because there are 27 countries in the index – many of which have seen huge correction. In major markets, most have seen handsome rallies this year.

Here is how some of the indices in major emerging markets have done this year: 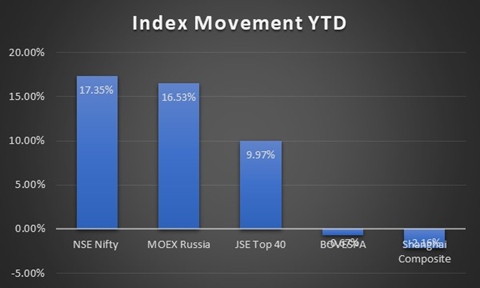 NSE Nifty: It is a blue-chip 50-share index in India. It consists of 50 largest companies on India’s first dematerialised stock exchange – National Stock Exchange. The stocks make it to Nifty based on their market capitalisation. The benchmark has rallied by a healthy 17.35% on a year-to-date basis, despite foreign funds pulling out of India.

MOEX: The MOEX Russia Index, formerly MICEX Index, is the main ruble-denominated benchmark of the Russian stock market. The number of component companies listed on the MOEX is variable, depending on liquidity and trading frequency. The index is traditionally favoured by domestic investors, while foreign investors prefer the RTS Index. The MOEX index has rallied by 16.53% in 2021.

JSE Top 40: This is South African benchmark and a capitalisation-weighted index. The index comprises 40 largest companies by market capitalisation included in the JSE All Shares Index. The index was developed with a base value of 10,399.53, as of 21, June 2002. The index has rallied 9.97% this year.

BOVESPA: This Brazilian index is made of 84 stocks listed on Brasil Bolsa Balcão. It is a weighted measurement index. However, as COVID-19 has rattled the South American nation, the BOVESPA has corrected by 0.67% this year.

Shanghai Composite Index: The Chinese economy has been the only one across the world that did not face the brunt of recession last year. However, things haven’t been same for its markets. As Beijing continues its purge on businesses across the country, the Shanghai Composite has corrected by 2.16% this year.