Epic Games recently introduced an update for both the iPhone and Android version of the game. Instead of using the official sanctioned system for both the platforms, it allowed the users to pay Epic directly for in-app purchases, violating the terms of the payment system.

Currently, Apple users cannot install the game, but Android users can, directly through Epic Games own app launcher, opening from any web browser. With the new update, users can buy in-game currency at a lower rate bypassing Apple and Google platforms.

On iPhone, players who have the gaming app installed can continue to play the game until the next update rolls out, after that the players will lose some features. Those playing on Apple Mac computers will not be affected with the ban as that version does not use the iOS App Store.

Epic looks well prepared with the repercussions of the new update as minutes after the Apple ban came in, Epic Games filed a lawsuit against the tech giant. 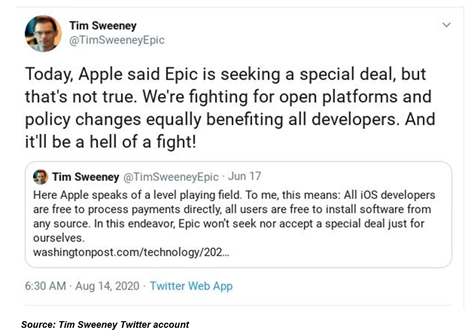 Apple (NYSE:AAPL) and Alphabet Inc. (NYSE:GOOGL) take a standard 30 per cent cut of sales from its compulsory payment system. But, compared to Apple, Google is an open platform which allows multiple stores. Google Play's policies apply to all the developers, but it has no problem with the existence of other stories and Epic distributing its games on them. Apple, on the other hand, is a closed platform, and on iOS, the App Store is the only way to install apps legitimately.

After the fallout, Apple said that the Epic Games had taken an unfortunate step of violating the App Store guidelines, which include restrictions on any payment system apart from Apple's. This has been a subject of many high-profile feuds between developers and Apple.

Epic carefully circulated a series of responses including an antitrust lawsuit against Apple's policies and a protest video which aired on YouTube and within the Fortnite game. The short film is titled Nineteen Eighty-Fortnite, it is inspired by a famous play on George Orwell's novel Nineteen Eighty-Four. Its purpose is to mock iPhone maker's iconic "1984" ad and ignite gaming fans to support its fight against Apple. Hashtag #FreeFortnite' is trending on Twitter with thousands of Fortnite fans coming in to support. 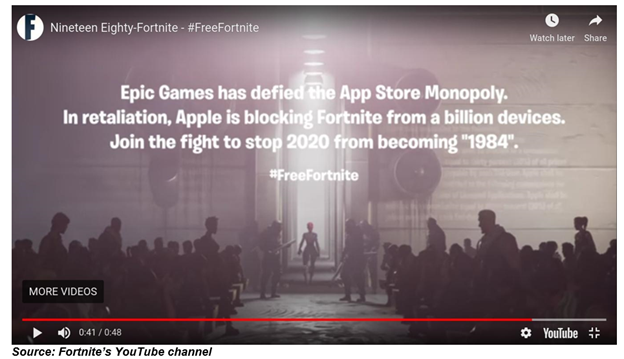 In the legal complaint, Epic has directly referred to the advertisement saying Apple has become what it once stood against, trying to control the markets, block any kind of competition and stifle innovation. The lawsuit also alleges Apple on managing what kind of apps can appear on the App Store and the 30 per cent cut on its own payment system, which is high.

Epic's attempt seems to be more triggering towards Apple than Google as Fortnite studio launched its new iOS update on using how its in-app payment system could be less in pricing than Apple's.

Epic Games, Inc. is a video game, software developer and publisher company based in the state of North Carolina, USA. Founded by Tim Sweeney, Epic Games develops Unreal Engine which is a commercially available game engine. The platform powers their internally developed video games like Fortnite and the Unreal, Gears of War and Infinity Blade series.

With Guinness World Records declared in 2014, Unreal Engine is the "most successful videogame engine".

Epic Games launched its gaming store and attempted to disrupt the PC gaming market. Its rival Steam is a dominant player in the market which lures players with free games. In 2017, it launched Fortnite Battle Royale which became a hit.

Allegations and Support Game On

Sweeney said that the iPhones are not the biggest platform for Fortnite, but Epic will still notice the ban. The iOS version generates millions of dollars in revenue every month on Apple platforms.

In the statement released by Apple, the rules are applied equally to every developer, but Epic updated the game with an intent of violating the App Store guidelines. Epic has launched many of its apps on the Apple platform and have benefited from the App Store ecosystem.

Experts from the video game industry are applauding Epic on taking up the fight with tech giant Apple. Notably, Epic isn't seeking any monetary compensation from this lawsuit.

Apparently, the lawsuit is about antitrust and the monopolistic practices Apple undertakes to stifle competition on iOS.

Music streaming service Spotify also showed its support to Epic Games; it had lodged its own antitrust complaint in 2019 against Apple. Spotify welcomed Epic as an ally in a long fight over App Store fees.

Currently, when the EU and US Congress are closely monitoring Apple's business practices, this undue attention seems to be unwelcoming for the company.