Electric vehicle maker Tesla Inc (NASDAQ: TSLA) lost around US$200 billion in market value after a massive stock selloff in the recent sessions, the biggest since September last year.

The selloff began on Monday after Tesla CEO Elon Musk asked his Twitter followers whether he should sell 10% of his stake in the firm. Some 58% of people in Saturday’s poll voted in favor.

It was followed by another news that Tesla’s several former and current board members, including Musk’s brother Kimbal, sold US$1 billion worth of company shares late last month.

Also Read: Seven green stocks that may give a leg-up to the sector in 2022

Elon Musk lost about US$50 billion since the selloff began this week. However, he continues to retain the world’s richest person title on the Bloomberg Billionaires Index.

The selloff also marked the biggest two-day decline in the index’s history. In 2019, then Amazon.com CEO Jeff Bezos had lost US$46 billion in personal wealth in a similar stock sale.

Musk’s recent losses now narrowed his lead over Jeff Bezos by US$82 billion. 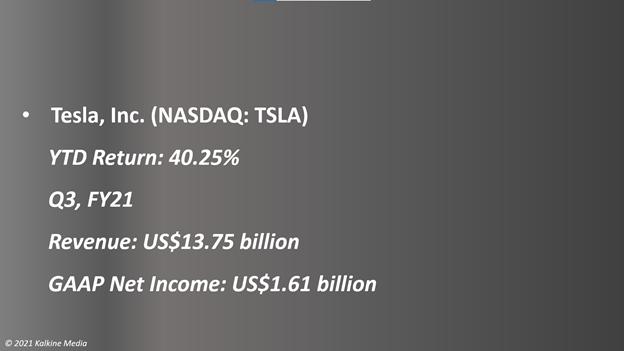 In January, Elon Musk overtook Jeff Bezos to become the world’s richest person for the first time, with a wealth gap of US$143 billion, a value greater than the net worth of the world's fourth-richest person, Bill Gates.

However, despite a decline in Musk's net worth, his fortune is still up by 70% this year, mainly due to gains from his EV firm and a higher valuation of his aerospace company SpaceX.

Tesla’s third-quarter revenue jumped 57% YoY to US$13.75 billion, while its GAAP net income attributable to common shareholders increased by 389% YoY to US$1.61 billion.

In the third quarter, Tesla delivered 241,391 vehicles, representing an increase of 73% YoY.

Also Read: Are these infra stocks poised to take off after US$1 tr spending plan?

The company continued to maintain strong growth momentum in the latest quarter due to robust demand and vehicle deliveries. In addition, Hertz Global Holdings Inc's plump order for 100,000 Tesla vehicles pushed its market valuation above the US$1-trillion mark.