We all have heard of massive tech players Facebook, Amazon, Google, or Apple. As these companies have been in a dominating position for many years, American authorities wanted to find out if they became too powerful and established a monopolised dominance.

The House Judiciary Committee decided to start research many years ago, which involved tons of analysis, interviews, and opinions from Republican and Democrat political parties in the US.

The research resulted in a 450-pages long report that explains how Big Tech got to their current position and brought a verdict about the suspected monopoly behaviour.

The Committee found that Google, Facebook, Amazon, and Apple did show monopoly misuse of power, as they seemed to be preventing the other tech businesses’ success on the market without being connected to them. The authority decided to take further action against the Big Tech players and will implement different treatments on how to do so. 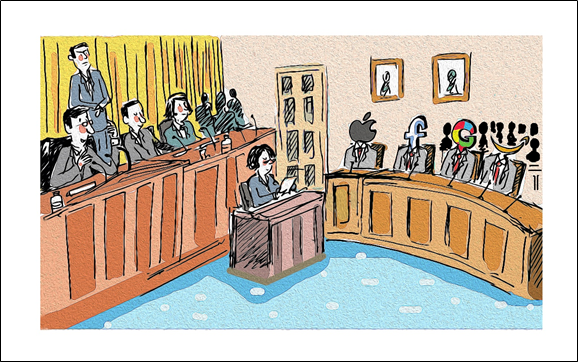 What is antitrust law?

The Committee needed to comply by antitrust law’s rules while investigating Big Tech. The law delves into the core of powerful businesses, making sure their triumph is achieved by playing by the rules.

A firm can become successful even though it may appear it has a monopoly over the industry. However, that is not always the case. On more occasions, that is just how the marketplace is, where other competitors are far behind the more successful enterprises.

Most big businesses need to pass antitrust law’s core values at some stage of their existence. They need to ensure that they followed the right path of growth while allowing other businesses to flourish on their own.

Each successful business needs to respect both their customers and other firms to maintain legal behaviour. If these criteria are fulfilled, antitrust agencies will mark the firm as safe.

On the other hand, if companies do not obey the provided rules and instead make their way up to the top by not allowing competition to work, that is the moment when several committees will come knocking.

In this particular case, the House Judiciary Committee worked hard to find out all the data they provided in the report. They interviewed more than 240 people and businesses, investigated over 1.3 million internal papers and reviewed suggestions for a period of a few years. All the hard work was done by 38 hardworking individuals that specified in understanding antitrust law.

The social network giant became a part of this enormous study as it is the biggest social media network in the world.

The report found that Facebook (NYSE:FB), from all its platforms, collected total revenue of US$70 billion in 2019 alone. The social media network earns approximately US$7.05 from each user, and an estimated 2.7 billion monthly users contribute to that revenue.

The thing that flashed the reddest lights was that Facebook’s ‘family’ of apps managed to get the top spots on the best apps in the world list. Why was that concerning?

Facebook was found guilty of monopoly power because it bought a lot of popular apps before they became a genuine competitor in the social media world. By making that move, Facebook ensured owning all pillars of social networking so no other competitor could come close to Facebook’s level.

Facebook, on its part, claims that TikTok, Snapchat and Twitter represent huge competition to them, as those apps attract large amounts of users. While that may be true, the social network giant still owns four out of seven most successful apps of all times in the US, representing more than the one eight of the whole population (1.79 billion daily users).

According to the report, Facebook deliberately cut the competition, most famously with Snapchat. ‘Project Voldemort’ became famous because the Committee found evidence within Mr Zuckerberg’s and Facebook’s confidential conversations, which resulted in finding out what truly happened.

The Committee concluded that Facebook bought several social networking apps so it could stop competitors from achieving what Facebook did.

The report also determined the duopoly between Google and Facebook, especially regarding online advertisements.

Larry Page and Sergey Brin forever changed history with the search engine they designed back in 1998. It took them only two years to become founders of the most powerful search engine in the world.

Google was unique because it had a new PageRank algorithm, a feature that allowed most popular pages to be seen first, depending on how many websites are related to it.

Up until now, Google developed a strategy that made almost the entire planet ‘addicted’ to its products – Google Maps, Android, YouTube, Chrome, Gmail, Google Play, Google Photos, Google Store and Google Drive. If one owes a smartphone or a personal computer, the system is almost impossible to operate without these nine apps.

However, Google, and its parental company Alphabet Inc. (NYSE:GOOGL), make most of their revenue through online ads. The companies own 80 per cent of total market share within the industry and have achieved it, similar to Facebook, through acquisitions.

Google’s most significant problem is that its primary PageRank algorithm does not work as it did once it first launched. On the contrary, it works in Google’s best interest and not for the best user experience.

The search engine goliath has been found guilty of monopoly, as it consists of 92 per cent of global Internet searches. According to the Committee, Google purposely did many antitrust misconducts to eliminate other competitors and put itself on the top of the throne.

If someone has not heard for Amazon (NASDAQ:AMZN), they probably found out about it this year, as the e-commerce behemoth has witnessed an increase of over 200 per cent in sales since the pandemic.

According to the Committee’s research, Amazon has undoubtedly used its influence over e-commerce and had forced small and middle-sized businesses to depend on the online retailer.

Amazon’s biggest issue seems to be launching its products after some third-party source puts its products on the retailer. The report also found that Amazon knowingly searches for competitors and gets in bed with them so the other race would not occur.

2.3 million sellers advertise their products via the Amazon platform, and a third of them depend directly on the sale they make from Amazon.

The e-commerce giant also made sure that it develops business around logistics and actual retail, so other competitors would not stand a chance against them. On the contrary, many companies that signed a contract with Amazon have said they have no other choice but being in bed with it, as ‘they have it all’.

Due to this kind of behaviour, the Committee found Amazon undoubtedly guilty of going against antitrust law.

Last but not least, the biggest smartphone company in the world, Apple (NASDAQ:AAPL) has been sued multiple times because of monopoly issues by third-party companies.

The latest affair was when Apple got rid of the popular game Fortnite from its Apple Store. The argument between Epic Games and Apple has still not been concluded but has shown that iOS software unfairly achieved its dominance.

The Committee accused Apple of using monopoly power over its software (iOS) and not smartphones or computers. Together with Android, the two smart systems have taken over the world and have not let anyone else join the rivalry.

The iPhone maker has also been found guilty of what apps can be used on Apple devices, as it allows Apple apps alone, or third-party apps that can be purchased through Apple Store.

Another witty idea Apple did was to force app developers to make apps using in-app purchase system (IAP), which raises costs for everyone wanting to put their apps on Apple Store. If developers did not obey the IAP rule, they faced a risk of their app not getting accepted by Apple.

The Committee concluded that even late CEO Steve Jobs knew of this clausulae, but intentionally made it that way to create the anti-competitive environment.

After the research got issued for the general public, it raised many questions about what will happen next.

The Committee suggested a way of breaking these monopolies, a different way for each company, as they are all different. The most important thing it stressed was to break up Big Tech, but it cannot be sure it will happen.

Breaking them up would mean that the new US President would need to take legal action and implement new business laws, but the Presidential candidates have not talked about that strategy in their speeches.

Whatever happens, Congress will try to ensure getting rid of the anti-competitive behaviour and maintain an available market for all-sized businesses.