As the world is witnessing a raging second wave of COVID-19 pandemic, for India – the world’s second most populous country – the monstrous virus has unleashed a tsunami.

The new infections are skyrocketing at such a pace that the country, which had almost declared a victory over the deadly virus two months back, is short of oxygen and some key medicines. The shortage is plaguing not just Tier II and III cities, but metros like Delhi and Bengaluru.

As the daily cases rose by 38% in the last week, India made up for 48.7% of the fresh infections reported globally on Sunday. In simpler terms, of every two cases that world reported on Sunday, one was an Indian. 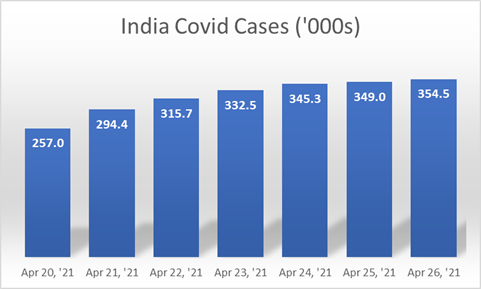 Despite COVID-19 having taken a deadly turn, the country is going about its business as usual, which is being seen as a “tone-deaf” approach by a large portion of the population. As positivity rate – the percentage of positive cases as part of total tests conducted – touched 29% in east Indian state of West Bengal on Sunday, the state continues to brace for its provincial election. 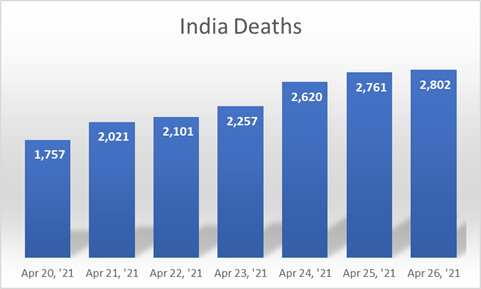 Also, the country is witnessing yet another season of Indian Premier League (IPL) – an annual highly commercialised T20 extravaganza. Many people have called this year’s tournament as ‘tone-deaf’. In fact, international cricketers have also started raising questions about the need to hold the tournament.

“Best wishes to all in India. Frightening Covid numbers. #IPL continues. Inappropriate? Or important distraction each night? Whatever your thoughts, prayers are with you,(sic),” former Australian southpaw Adam Gilchrist wrote on the microblogging website Twitter.

Many countries across the globe, including Australia, New Zealand, and the UK, have restricted their air travel with India.

However, as India falls short of life-saving oxygen, hospital beds and many other medicines, the world has started coming to its rescue.

Also Read: Are the Vaccines Working? When will Covid-19 end?

Also Read: COVID-19: How Will Delays in Vaccine Rollouts Affect the Economy?

Few hours back, the US National Security Council said that the country would be providing vaccine materials, drugs, test kits, along with other medical equipment. It further said that the US was looking at avenues “to provide oxygen generation and related supplies on an urgent basis.”

“Just as India sent assistance to the United States as our hospitals were strained early in the pandemic, the United States is determined to help India in its time of need,” US President Joe Biden tweeted on Sunday.

The United Arab Emirates and Kingdom of Saudi Arabia have also started supplying oxygen to India. The neighbouring country of Pakistan has also been offering support to India – both at people-to-people level and the government level.