When much of the world is struggling to prevent the shaky rebound from being derailed by new coronavirus outbreaks, China's economy seems to be on its way towards growth.

China, the world's second-biggest economy is gradually recovering from the ill-effects of COVID-19 with substantial improvement in industrial production and retail sales for October.

The manufacturing sector witnessed a remarkable recovery in 2020 backed by robust exports after the pandemic crippled vast sections of the economy.

As per the National Bureau of Statistics, China's industrial output jumped 6.9% YOY in October compared to a year earlier, expanding for the 7th consecutive month. The rise was in line with the gains recorded in September but surpassed market expectations of an increase of 6.5%.

The factory output increased by 0.78% in October compared to September monthly.

Some of the highlights of the industrial production data for October 2020 included the following: 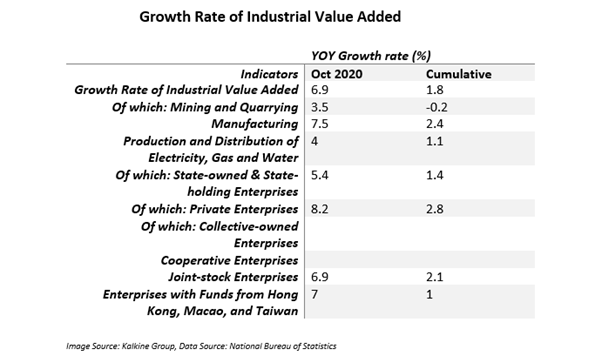 Consumers are also opening their pockets to enhance economic growth further as the country recovers from the pandemic slowly.

While retail sales in China increased by 4.3% in October yearly, totalling to 3857.6 billion yuan but falling short of market expectations of 4.9%.

However, the reading was above the 3.3% gain seen in retail sales in September and was the most massive increase since last December as consumer spending recovered with a gradual easing of restrictions on activity.

Some of the highlights of the Chinese retail sales data for October includes the following:

After the second quarter, China's steady run of improving data and recent official statements have triggered expectations that the central bank may begin to tighten policy.

Yet experts claim that in the face of ongoing uncertainty about the pandemic and economic demand, lawmakers are reluctant to hurry to wind down current stimulus.

China appears to be fast-tracking its economic recovery in Q4 with a rebound in demand, robust credit growth and stimulus measures likely to provide a substantial tailwind into 2021.

As per many experts and market reports, the recovery momentum of China will sustain in the coming months.

China is predicted to be the only nation to report positive growth in 2020, according to the IMF, and is expected to generate more than 8% growth in 2021.

DO WATCH: China's economy is back on track, but does it meet economist's expectation?

China has been able to recover economically quicker than other developed nations. China had reported GDP growth of 4.9% in Q3 from a year ago, taking the growth for the first 3 quarters of the year to 0.7% YOY, as per NBS data.

Imports and exports also witnessed a growth of 13.2% and 9.9% in September 2020 compared to a year ago. Hence, the pandemic has majorly not affected the central position of China.

Although China's economic revival seems to be getting better, soaring coronavirus infections have affected export prospects in Europe and the US.

Fu Linghui spokesperson for China's NBS stated that outbreaks in Europe and the US created uncertainties for exports of China. Yet the total value of China's trade increased in 2020, beating the global trend.

Last week, former Chinese finance minister Lou Jiwei stated that trade conflicts between the US and China could not ease in the short term, even under the Joe Biden presidency.

Further, analysts expect that a Biden administration would retain a strict political approach on Beijing, keep tight controls on China's access to advanced technology. At the same time, it may behave less violently and more consistently than the Trump administration.