The last week of July has been a momentous one, with the most valued companies in the US disclosing their quarterly earnings report. All the big tech companies announced their quarterly results this week – some did better than expected, others underperformed the expectations.

Some saw investors celebrating strong numbers, while others saw dampened investor sentiment despite strong quarterly numbers. The top five big tech companies, also known as – Facebook, Amazon, Apple, Mircosoft and Google) if put together, are worth US$9.25 trillion – which would make up the third largest economy of the world, only after the US and China. The market capitalisation of these five companies is 76% of China’s GDP, and 47% of US GDP. 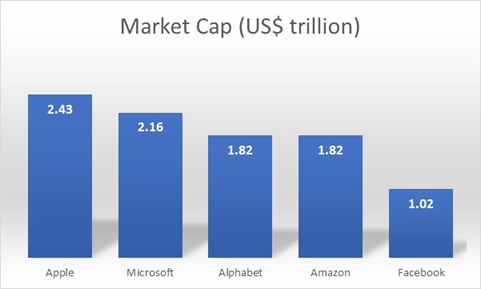 So, without a doubt, with such lofty valuations, the performance of these companies is tracked by people across the markets – crossing geographical parameters. Here is how they fared in the June quarter – the results for which were announced bygone week.

Apple Inc (NASDAQ:AAPL): This is the most valuable company in the US. The maker of iconic Apple iPhone and Macbook raked in US$21.7 billion in profits for the three-month period that ended in June, smashing the market expectations. The quarter also happened to be its best fiscal third quarter in its 45-year history, buoyed by strong sales of iPhone 12 and growth in its services business. However, the guidance given by the company wasn’t that strong.

Microsoft Corporation (NASDAQ:MSFT): This is probably the oldest of the big tech companies to make it to the top league. Back in 1975, when the company started its business, its prospects were buoyed by the computer operating system – Windows, which has become a household name over the years. Beating the market expectations, the company has reported revenues of over US$46 billion for the quarter – a rise of 21% compared to the same quarter last year.

Alphabet Inc (NASDAQ:GOOG): If you are reading this article right now, you would, for sure know about a search engine called Google. The search engine, owned by Alphabet, has become a constant companion of anyone accessing the world wide web across the world. Some people have started to jokingly call it as Professor Google. The company, in the June quarter, overperformed the estimates. It reported quarterly revenue of US$61.8 billion, a 62% increase on the same period a year earlier, and a bottom-line of over US$18.5 billion, more than double its profits for the same period last year. The swell in the company’s earnings were buoyed by an increase in its advertising revenues – that rose 69% from last year.

Amazon Inc (NASDAQ:AMZN): The e-commerce giant clocked US$100 billion in revenues for the third quarter in a row. However, it did miss the market expectations marginally. The company’s revenue grew by 27% year-on-year to US$113.08 billion – a significant slowdown from the second quarter of 2020, when sales skyrocketed 41% year-on-year due to a boost from the pandemic-induced lockdowns.

Facebook Inc (NASDAQ:FB): This social media behemoth is the youngest of the big tech companies in the fray. As the company’s revenue grew 56% year-on-year in the second quarter to US$29.08 billion, it overperformed the market expectations that had pegged its quarterly revenues at around US$27 billion. This is also the fastest revenue growth for the company since 2016, accelerating from a 48% jump in the prior quarter.