Ever since coronavirus affected the first human being and caused the first fatal case, scientists have put their entire focus on combatting the novel virus.

However, many diseases that were troubling and concerning, even before COVID-19 killed almost two million people globally, did not get as much attention as coronavirus or funds to find a proper solution.

Some of those health issues are -- undestroyable microorganisms and superbugs. They are dangerous as they develop antibiotic resistance to standard medicines.

Some experts forecast that more than 10 million people will likely die due to antibiotic resistance by 2050. For that reason, many are trying to find a long-term solution for fighting against microbiomes, which are immune to modern medicines.

However, a couple of Australian scientists are optimistic that human waste could be the key to fight the lurking problem.

Humans naturally eject bacteriophages through sewage, organisms that find germs inside the body and kill them by injecting their DNA into the problematic virus.

Resistance to most common medicine is already affecting specific individuals, specifically people from the older generation, who take at least one pill per day and who got overly prescribed for antibiotics.

That said, scientists thought of a possible solution some patients could follow when things go south – phage treatments.

Bacteriophages could be easily extracted from human faeces and urine, so Dr Ruby Lin and Dr Khalid believe sewage phage could be a miracle treatment:

Almost 300 people living in Australia die each year due to virus infections that cannot be cured with regular drugs, according to the Organisation for Economic Cooperation and Development (OECD).

Australian Commission of Safety and Quality in Healthcare reported that doctors are prescribing too many antibiotics and that many people are misusing the drugs in question. Those factors resulted in a significant problem and created superbugs, organisms that are immune to almost all medical treatments.

What are some case studies involving bacteriophage treatment?

Dr Lin is part of the team at the Westmead Institute for Medical Research (WIMR), which is running clinical trials on certain individuals facing a superbug infection.

Currently, there are 13 patients that are testing the phage therapy. One of them is a little girl who developed severe disease in her leg after meeting a car accident overseas.

After the girl and her doctors realised that the leg was not healing properly, the girl was sent to the Institute so that the superbug could be thoroughly investigated.

The WIMR Professor Jon Iredell was the researcher looking into the little girl’s case, and has observed the following: 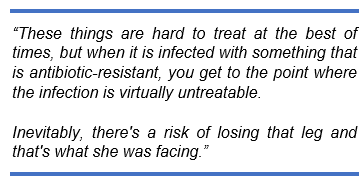 After weeks of careful observation and identifying the exact superbug, the little girl fully recovered and started walking properly.

What is the biggest challenge during the therapy?

According to experts, the time before they identify which bacteriophage is to be used for a specific infection is the key factor, as the superbug could kill the host in the meantime if not successfully contained.

But, finding the correct phage is also a challenge, as different phage DNAs kill different viruses. Essentially, there is no universal bacteriophage for several infections.

The treatment had still not been thoroughly investigated, but scientists think it could be a world-changer for specific patients that have already drained their possibilities.