In the light of rising infections in Europe, countries are embracing lockdowns again. As a result, it is highly likely that domestic travel would be impacted. The results of Amex, Visa, and Mastercard also show the implications of a halt in cross border people movement.

Last week, Visa reported Q4 and full-year results for the period ending on 30 September 2020. Although for many countries there has been positive domestic spending growth in the last quarter, cross-border spending remains depressed due to lacklustre travel spending.

Net revenues for the quarter were US$5.1 billion down 17% compared to the same period last year, and full-year revenues were down by 5% to US$21.8 billion. 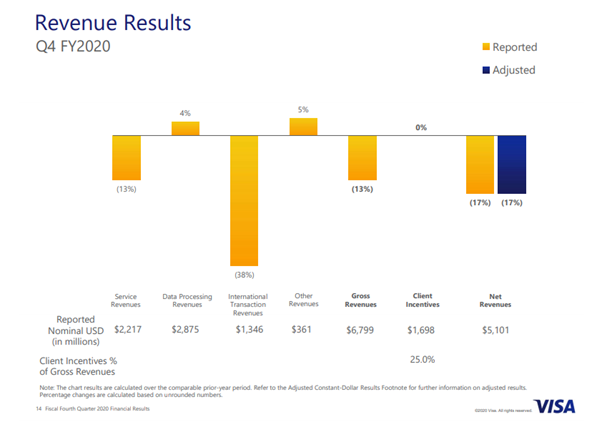 Visa also announced a definitive agreement to acquire YellowPepper. The management believes that the transaction would improve adoption of its ‘network of networks’ strategy in the Caribbean and Latin America.

During the quarter, the company spent US$1.6 billion to repurchase 8.2 million shares of class A common stock. For the year ended September 2020, Visa’ share buyback saw spending of US$8.1 billion.

Net revenue for the quarter was US$3.8 billion against US$4.5 billion in the previous corresponding period. 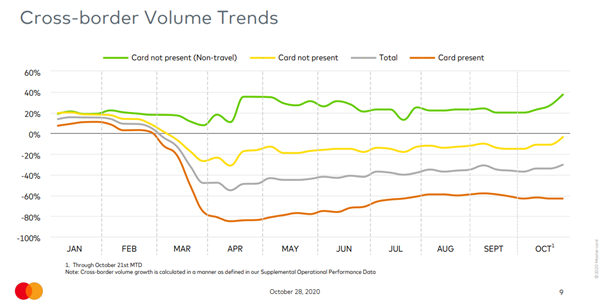 In Q3, net revenue decreased by 14% compared to the same period last year. This result was largely driven by a decline of 36% in cross-border volume (local currency terms). Net revenue was supported by gross dollar volume growth, switched transaction growth, and other revenue growth.

During the third quarter, the company paid US$402 million in dividends and repurchased 6.5 million shares. At the end of September 2020, it had issued 2.7 billion Mastercard and Maestro-branded cards.

On 23 October 2020, the company released third-quarter results for the period ending on 30 September 2020. Chief Executive Stephen J. Squeri noted that though business continues to be impacted by the pandemic significantly, third-quarter results have cemented the confidence on the strategy to manage the crisis. 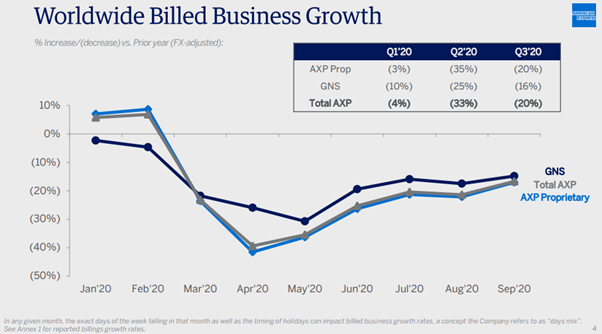 Consolidated expenses for the quarter were US$6.7 billion, down by 14% from the previous corresponding period. This decline was driven by lower customer engagement costs and lower usage of travel-related benefits.

Net income for the quarter was US$1.07 billion compared to $1.75 billion in the previous corresponding period.