The much-awaited trans-Tasman quarantine-free travel began between Australia and New Zealand Today. The new arrangement allows Kiwis and Aussies to travel between both the countries without requiring any quarantine on arrival. The only requirement for a traveller would be an online declaration and a negative report prior to flying.

Welcoming this step after 13 months of closed border, the Governments on both sides clarified that they were not in a hurry to open up borders for the rest of the world.

Scott Morrison, the Prime Minister of Australia, said that the conditions in Australia and New Zealand were very different as compared to the rest of the world with regard to the spread of COVID-19. So, the government would consult with the states, regions, and the health authorities on this. 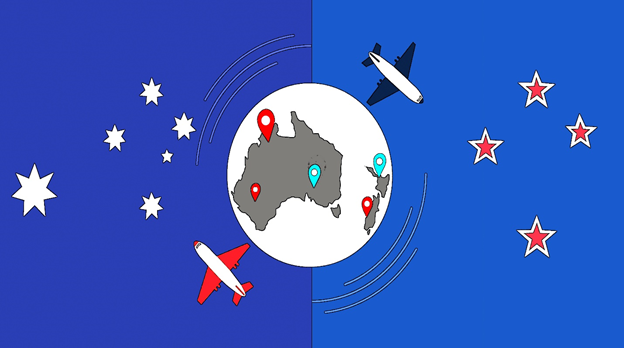 People on both the sides have waited for 13 months for this bubble and now several of them have filed for passports, with Air New Zealand and Qantas started flying already.

The travel bubble officially began 11.59pm on Sunday. The New Zealand Prime Minister, Jacinda Adern, had announced the date last week and said that the two countries would be able to manage the travel between each other.

Passengers coming from both the countries will be on Green Zone flights, which have no other passengers other than those belonging to these two countries. The crew will also not have flown to any other country in the last 14 days.

Auckland International Airport (NZX: AIA) chief executive Adrian Littlewood said that with international passengers  starting to come in the travel bubble flights, the footfall would increase 10 fold. This will also generate good revenue as compared to the past year. The stock was up by almost 3% at NZ$7.600 at the time of writing this article.

Air New Zealand Limited (NZX:AIR) resumed its flights to different destinations in Australia this morning. The stock gained 1.40% after opening and was trading at almost NZ$ 2 at the time of writing.

The opening of the  Trans-Tasman bubble is likely to give an economic boost to the travel industry. It is a well-known fact that till now the  tourism sector was the worst hit by the pandemic. Even though domestic tourists were there, international travellers were almost reduced to zero and according to reports, it is the international travellers who are the maximum revenue generator for the travel industry. With the announcement of the flight routes, this sector is again brimming with joy as it will see a surge of travellers across both the sides of the Tasman.
Also Read: What Does IMF’s World Economic Outlook Say in Detail?