According to the latest Office for National Statistics (ONS) data, the total debt for British government has crossed £2 trillion in July 2020, rising by £227 billion as compared to July 2019. It is noteworthy that the country’s economy is undergoing recession and witnessed a contraction in its total output by 20.4 per cent in Q2 2020 and by 2.2 per cent in Q1 2020.

The main reason for this stupendous rise in debt is public spending related to containing the coronavirus pandemic, especially with respect to introducing health & safety measures, and policies to support individuals and businesses.

It seems that no region in the world has been spared from the devastating impact of the coronavirus pandemic. For instance, the eurozone economy contracted by 12.1 per cent during Q2 2020, according to latest Eurostat figures released on 22 August 2020.

Eurozone is a fiscal union that consists of 19 out of the total 27 EU (European Union) member states.

In the eurozone, the Spanish economic growth fell the sharpest by 18.5 per cent for the second quarter. However, Britain was undoubtedly the worst hit economy for the quarter across the entire continent of Europe.

Public borrowing in the UK

The public borrowings during the first four months of the financial year i.e. April to July 2020 were £150.5 billion. This was £128.4 billion higher than the same period one year back in 2019. In fact, this was the largest four monthly UK public borrowings on records since the year 1993, when the monthly recordings started in the country. 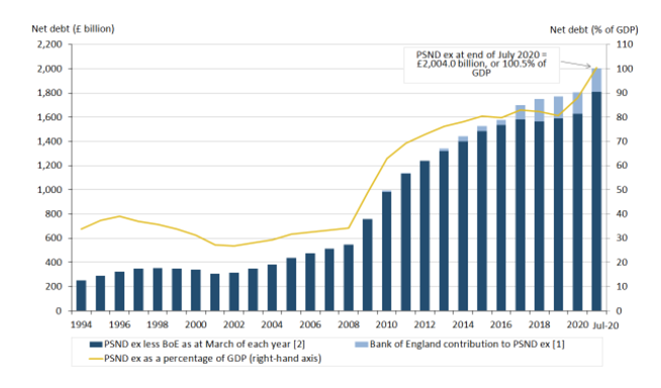 The UK government is currently running various schemes that have raised the government expenditure to a large extent and some of these are being mentioned below.

Self-employment income support scheme – By 17 August 2020, the total number of claims made under this scheme was 3 million. They were collectively valued at £8.6 billion.

Coronavirus job retention scheme – this scheme was launched on 20 April 2020. On 16 August 2020, 96 million people had been furloughed under the scheme with an expense of £35.4 billion.

Temporary VAT reduction for selected sectors - this scheme came into effect on 8 July 2020 and is applicable to hospitality, restaurants, and holiday accommodations. It has temporarily lowered the rate of value added tax from 20 to 5 per cent from July 2020 to January 2021.

Eat Out to Help Out Scheme – This scheme is applicable to the hospitality businesses in the country. Total amount claimed under the scheme by 16 August 2020 was £180 million.

On the one hand, the unprecedented crisis situation has led to a big rise in public borrowings. On the other hand, it has hit the tax revenues to a great extent.

The good news, however, is that the rate of interest that the government is paying for its borrowings is currently running low. Therefore, the government will have to spend a relatively lower amount to service its debt, as compared to a pre-pandemic scenario of little higher interest rates.

Rishi Sunak, Chancellor, UK Treasury is cautious of the rising public debt, which is at an all-time high level, and might not make any substantial announcements during the autumn budget. He has also said earlier that this amount of support was required to push up the struggling economy, and without this, things could have gotten worse.

However, he added that the country has to face reality sooner than later, so gradually the government support schemes will be withdrawn. The furlough scheme ends in October 2020, and is not likely to be extended despite many industries lobbying for the same.

Nonetheless, the biggest worry for the UK government remains the rising unemployment levels. With no signs of any sustainable and broad-based revival in growth, there are apprehensions of further job losses across many ailing sectors.

For the last quarter of April to June 2020, employment had dropped by 0.22 million. This was the largest quarterly fall recorded since the global recession year 2009. Moreover, many more people are expected to get off their employer pay rolls beginning November 2020, when the furlough support is withdrawn by the government.

For instance, Britain’s four largest air service providing companies have asked government to support the aviation companies as they are facing severe liquidity crunch. These companies have warned of further staff layoffs, in case government aid is not extended. In fact, some of them also face a closure.

Few days back, Marks & Spencer had said that it was planning to layoff 7000 employees to streamline operations in the wake of the coronavirus pandemic.

The prevailing rate of unemployment in the country is 3.9 per cent, according to official estimates. However, a recent report from the London School of Economics (LSE) quoted that it seemed that the government’s furlough scheme is responsible for bringing in the distortions in the unemployment data. LSE has estimated that the actual unemployment could have dropped by around 15 per cent between February and July 2020.

Also Read: What Next For The Ailing UK Economy?

Finally, while the mounting government debt is definitely an area of concern, and the government is also cautious of limiting any further big expenses that might raise the fiscal deficit further, however, the burning question is if this should be the main priority right now. In fact, some experts argue that this probably is the time to do whatever it takes to kick start the economy and contain any further mass lay offs by struggling businesses. If that happens, the overall consumer sentiment will go down and the consequent demand for goods and services could become even harder to revive.