Consumer confidence in the UK has increased modestly in December as the economic situation looks progressive on the back of the start of the Covid-19 vaccination programme in the country. The Consumer Confidence Barometer rose by seven points and was minus 26 in December as compared to minus 33 in November,

The indicator is based on a survey conducted by German market-research company GfK. The last time the index jumped by such a high margin was between October and November 2012.

In December, the rise in confidence was backed by the start of the Covid-19 vaccination process as Britons are confident about a positive economic situation in the next 12 months. 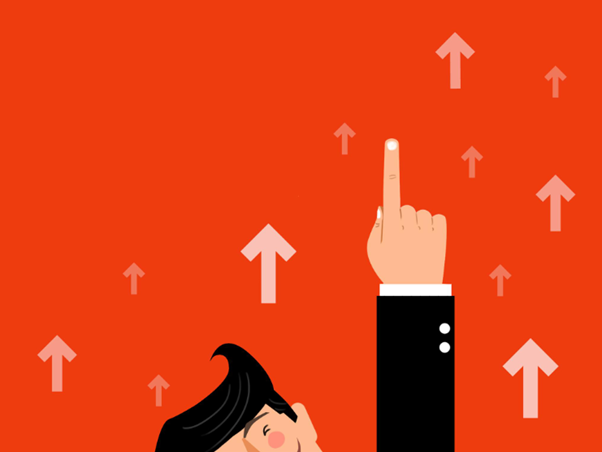 Joe Staton, Client Strategy Director of GfK, said that consumers were looking for some good news and they found it in the form of the Covid-19 vaccination programme. This lifted up their mood before the festive season. About 10 days ago, Britain began with the inoculation programme of Pfizer/BioNTech’s vaccine after receiving an EUA approval from MHRA on 2 December.

To Know More, Do Read: It is V-day in Britain: Pfizer-BioNTech’s Covid-19 vaccine to start rolling out

The below chart depicts the change in the consumer confidence index in a period of one year: 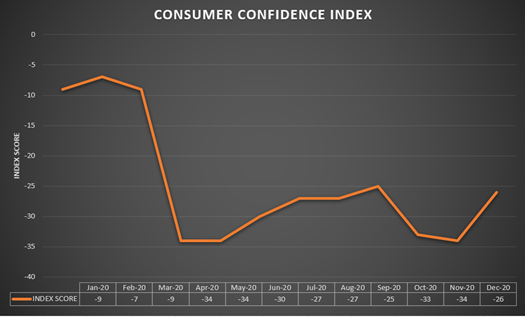 The consumer confidence was running negative even before the pandemic broke out. Its value was minus 9 in January. But it drastically dropped to minus 34 in April after the first lockdown was imposed in the UK. Later, it gradually improved to minus 25 in September, after which it fell once again with the surge in coronavirus cases.

Different measures of the index

Personal Financial Situation: The index measuring changes in personal finances over the last 12 months was up by seven points to -9 in December, while it was still some six points lower than the value recorded in December 2019.

However, consumers seemed more confident about the state of their personal finances over the next 12 months, with the index rising by eight points to 3.

General Economic Situation: The index registered a 15-point increase in consumer confidence relating to the economy over the next 12 months compared to November, reaching minus 35 from minus 50. Though the figure is eight points lower than that in December 2019.

The measure for the UK’s general economic situation over the past 12 months surged by just two points to minus 65 as the consumers appeared more confident about the economy in 2021.

Major Purchase Index: The six-point rise in the major purchase index comes as good news for retailers. It was recorded at minus 22, up from minus 28 recorded in November.

Savings Index:  GfK’s savings index jumped by six points from 11 to 17 for November, recording only a point lower than that in December 2019. 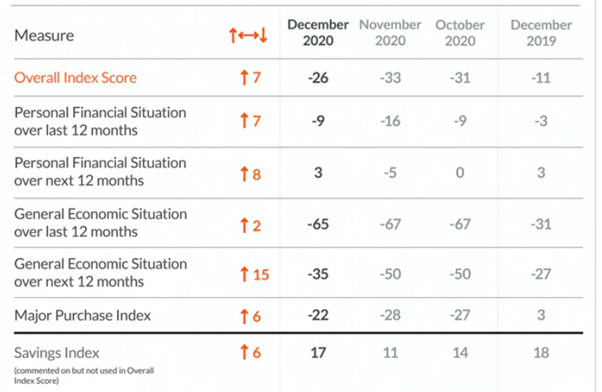